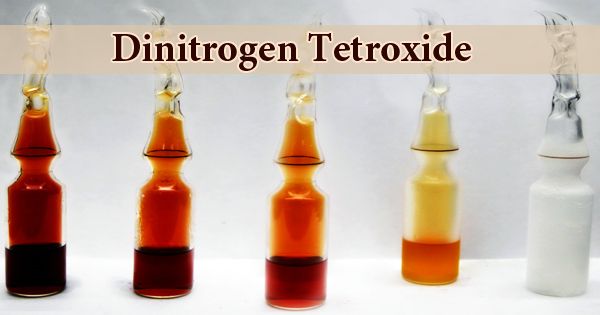 A colorless gas that becomes a pale-yellow liquid below 21°C and solidifies below -11°C is dinitrogen tetroxide, generally referred to as nitrogen tetroxide (NTO). The gas dissociates into nitrogen dioxide molecules when heated: N2O4(g) = 2NO2(g). In chemical synthesis, it is a valuable reagent. On contact with different types of hydrazine, it is a strong oxidizer that is hypergolic (spontaneously reacts), which has rendered the pair a popular rocket bipropellant. At 140°C, this dissociation is complete; liquid tetroxide dinitrogen has strong solvent properties and is used as a nitrating agent.

By the reaction of copper with concentrated nitric acid, dinitrogen tetroxide can be readily prepared in the laboratory; mixed nitrogen oxides containing dinitrogen oxide can also be formed by heating metal nitrates. At the boiling point, the solid compound is completely N2O4 and the liquid is around 99 percent N2O4; N2O4 is diamagnetic. It could be regarded as bonded together by two nitro groups (-NO2). It forms a nitrogen dioxide equilibrium mixture. With an N-N bond distance of 1.78 Å and an N-O distance of 1.19 Å, the molecule is planar. The N-N distance is equivalent to a weak bond since it is slightly longer than the N-N single bond length average of 1.45 Å.

As a nonaqueous solvent method (self-ionizes to NO+ and NO3–), LiquidN2O4 has been widely researched. Dinitrogen tetroxide is a result of combustion engines, along with other nitrogen oxides, and is believed to be involved in stratospheric ozone depletion. The catalytic oxidation of ammonia produces nitrogen tetroxide: steam is used as a thinner to reduce the temperature of combustion. The ammonia is oxidized into nitric oxide in the first step:

And as nitric acid, the rest of the water is extracted. The gas is actually pure nitrogen dioxide, which in a brine-cooled liquefier is condensed into dinitrogen tetroxide. During dioxide preparation, nitrogen tetroxide is often provided along with nitrogen dioxide. Mixed oxides are formed by the oxidation of airborne nitric oxide (NO), the heating of metal nitrates, or the reaction of metals to nitric acids or nitrates. It is a balanced combination of brown NO2 (nitrogen dioxide) and colorless N2O4 (dinitrogen tetroxide). It produces venomous brown vapors. A safety relief system cannot be fitted with the cylinders and ton containers. In their violent rupture and rocketing, prolonged exposure of the containers to fire or heat can result.

By the reaction of concentrated nitric acid and metallic copper, dinitrogen tetroxide can also be produced. In a laboratory setting, this synthesis is more practical and is usually used in undergraduate chemistry labs as a demonstration or experiment. Nitric acid oxidation of copper is a complex reaction that produces different nitrogen oxides of varying stability, depending on nitric acid concentration, oxygen presence, and other factors. In order to form nitrogen dioxide, the unstable species react further, which is then purified and condensed to form dinitrogen tetroxide. Coughing, choking, headache, nausea, pain in the chest and abdomen are caused by very concentrated fumes; otherwise, few symptoms occur at the time of exposure. Pulmonary edema gradually progresses after 5-72 hours of symptom-free time, causing exhaustion, restlessness, coughing, breathing problems, frothy expectoration, mental confusion, lethargy, bluish skin, and sluggish, fast pulse.

In combination with hydrazine-based rocket fuel, dinitrogen tetroxide is a hypergolic propellant. The Titan family of rockets, first used as ICBMs and then as launch vehicles for several spacecraft, was one of the earliest uses of this combination. Used against the U.S. It continues to be used as a station-keeping propellant on most geo-stationary satellites and many deep-space probes, both on the Gemini and Apollo spacecraft and also on the Space Shuttle. It is also the main oxidizer for the Proton rocket in Russia.

Since NOX interferes with the exchange of gas in the lungs, asphyxiation can result in unconsciousness and death, usually within a few hours after the onset of pulmonary edema. Unique hazards of combustion products: When heated, it produces a toxic gas. Fire behavior: Does not burn, but facilitates combustion of fuel materials such as wood. It can cause fire or explode when other materials are in contact. Dinitrogen tetroxide is commonly referred to simply as nitrogen tetroxide when used as a propellant and the abbreviation NTO is used extensively. In addition, NTO is also used with the addition of a small percentage of nitric oxide, which prevents the cracking of titanium alloys by stress corrosion, and in this type, NTO propellant-grade is referred to as mixed nitrogen oxides (MON). Purify it in an oxygen stream by oxidation at 0o, before the blue color shifts to red-brown. Alternatively, it is distilled from P2O5, then solidified by deep-freeze cooling (at-78o, giving almost colorless crystals). A variety of covalent metal nitrates with several transition metals can be formed if metal nitrates are prepared from N2O4 under fully anhydrous conditions. This is because the nitrate ion has a thermodynamic preference for bonding with certain metals covalently rather than forming an ionic structure. Tetroxide nitrogen does not burn but helps carbon, phosphorus, and sulfur combustion.