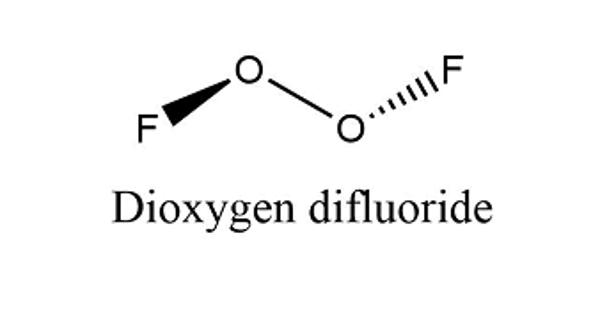 Dioxygen difluoride – a compound of fluorine and oxygen

Dioxygen difluoride is a fluorine oxide. It is a compound of fluorine and oxygen with the molecular formula O2F2. It is an inorganic compound used as an oxidizer in rocket fuel systems. It can exist as an orange-colored solid which melts into a red liquid at −163 °C (110 K). It is an extremely strong oxidant and decomposes into oxygen and fluorine even at −160 °C (113 K) at a rate of 4% per day: its lifetime at room temperature is thus extremely short. It is a poisonous gas. It is extremely toxic by inhalation. It can cause damage to the eyes and skin.

Dioxygen difluoride is not found in nature. It reacts vigorously with nearly every chemical it encounters – even ordinary ice – leading to its onomatopoeic nickname “FOOF” (a play on its chemical structure and its explosive tendencies). It can react violently in contact with water. It can explode when heated.

The molar mass is 66.99 g/mol. The molecule is formed by two cations oxygen O+ and two fluorine anion F-. It has a structure similar to the hydrogen peroxide, with two oxygen bound through a O-O single bond and one fluorine anion joined to each oxygen atoms.

Dioxygen difluoride is an orange solid with a particular odor. The density is 1.45 g/mL. The melting point is -154 °C and the boiling point is -57 °C. It is insoluble in most of the solvents and reacts violently with them.

Dioxygen difluoride can be obtained by subjecting a 1:1 mixture of gaseous fluorine and oxygen at low pressure (7–17 mmHg (0.9–2.3 kPa) is optimal) to an electric discharge of 25–30 mA at 2.1–2.4 kV. A similar method was used for the first synthesis by Otto Ruff in 1933. Dioxygen difluoride can be prepared by the reaction of an aqueous solution of sodium hydroxide and fluorine gas: NaOH + F2 → O2F2 + Na

Another synthesis involves mixing O2 and F2 in a stainless steel vessel cooled to −196 °C (77.1 K), followed by exposing the elements to 3 MeV bremsstrahlung for several hours. A third method requires heating a mix of fluorine and oxygen to 700 °C (1,292 °F), and then rapidly cooling it using liquid oxygen. It can also be obtained from the reaction of oxygen and fluorine gas at low temperatures. All of these methods involve synthesis according to the equation

It also arises from the thermal decomposition of ozone difluoride:

Dioxygen difluoride is used as an oxidizer in rocket fuel systems. The compound currently has no practical applications, but has been of theoretical interest. It can also be used in small amounts in laboratories to research particular properties of components with similar structure or in the synthesis of analogs. One laboratory used it to synthesize plutonium hexafluoride at unprecedentedly low temperatures, which was significant because previous methods for preparation needed temperatures so high that the plutonium hexafluoride created would rapidly decompose.