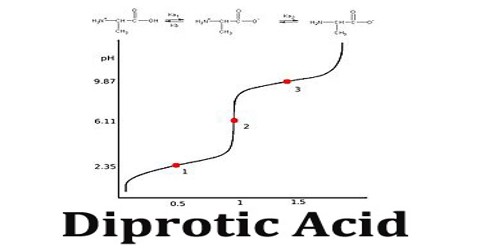 Diprotic acid is a type of polyprotic acid; it can undergo one or two dissociations depending on the pH. It is an acid that can donate two proton or hydrogen atoms per molecule to an aqueous solution. The most important chemical feature for a diprotic acid molecule is its ability to deprotonate two protons in two sequential steps during dissociation. Most diprotic acids are common acids which are used everyday in many different areas. Also, they exist everywhere in nature, such as in human bodies. Some other inorganic diprotic acids such as hydrosulfuric acid (H2S) usually have two hydrogen atoms linked to an electronegative center in each molecular. Dicarboxylic acids have a general molecular formula HOOC-R-COOH. The value of Ka is at least one hundred times larger than the value of Ka This is mainly because that more energy is required to remove a positively charged proton from HA with a negative charge in the above equation, and than from HA which is electric neutral in the above equation. This phenomenon can also be demonstrated by Pauling’s first rule.

Diprotic Acid (here symbolized by H2A) can undergo one or two dissociations depending on the pH. Dissociation does not happen all at once; each dissociation step has its own Ka value, designated Ka1 and Ka2: