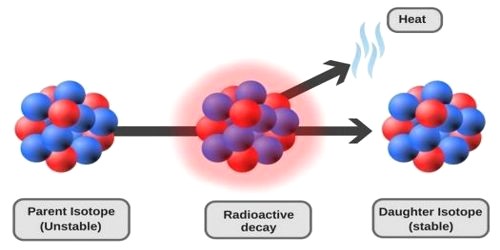 Radioactive decay is the spontaneous breakdown of an atomic nucleus resulting in the release of energy and matter from the nucleus. Some elements, and many isotopes, have what is called an unstable nucleus. This means the nucleus is either too big to hold itself together or has too many protons or neutrons. When this happens the nucleus has to get rid of the excess mass of particles. It does this through radiation. An atom that does this can be called radioactive. Unstable atoms continue to be radioactive until they lose enough mass/particles that they become stable. All atoms above atomic number 82 (82 protons, lead) are radioactive.

There are three main types of radioactive decay; alpha, beta, and gamma.

Every radioactive element or isotope has what is named a half-life. This is how long it takes half of any sample of atoms of that type to decay until they become a different stable isotope or element.

Marie Curie discovered the first form of radiation. She found the element and named it radium. She was also the first female recipient of the Nobel Prize.

Frederick Soddy conducted an experiment to observe what happens as radium decays. He placed a sample in a light bulb and waited for it to decay. Suddenly, helium (containing 2 protons and 2 neutrons) appeared in the bulb, and from this experiment, he discovered this type of radiation has a positive charge.

James Chadwick discovered the neutron, by observing decay products of different types of radioactive isotopes. Chadwick noticed that the atomic number of the elements was lower than the total atomic mass of the atom.

Enrico Fermi, used the neutrons to shoot them at uranium. He discovered that uranium decayed a lot faster than usual and produced a lot of alpha and beta particles.

Fermi then noticed that the fission of one uranium atom shot off more neutrons, which then split other atoms, creating chain reactions. He realized that this process is called nuclear fission and could create huge amounts of heat energy.

That very discovery of Fermi’s led to the development of the first nuclear bomb code-named ‘Trinity’.