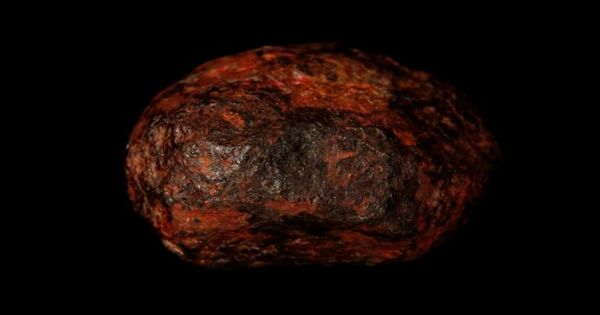 Edscottite is an iron carbide mineral, with the formula Fe2C2. It was previously known to occur during iron smelting, but in 2019 was identified as occurring in nature when it was discovered in a meteorite. It is one of the phases iron goes through when it’s cooling down from a high temperature, as it’s smelted into steel.

The source, the Wedderburn meteorite, was found in 1951 just outside Wedderburn in Australia and is held in the Museums Victoria collection. He first identified the unique iron carbide in 1971 while studying the meteorite, but technology hadn’t advanced far enough for him to characterize its structure.

Edscottite is just one of a number of minerals that have been identified in meteorites. This is a mineral that is known to form during the smelting of iron—but it has never before been found in nature. Unless a mineral is found to form naturally, it does not get an official name. By identifying edscottite in a rock that formed naturally, the researchers were able to name it.

Edscottite is a new iron carbide mineral that occurs with low-Ni iron (kamacite), taenite, nickelphosphide (Ni-dominant schreibersite), and minor cohenite in the Wedder-burn iron meteorite, a Ni-rich member of the group IAB complex.

Edscottite occurs as subhedral, lath-shaped or platy single crystals, ~0.8 μm × 15 μm to 1.2 μm × 40 μm in size, which is the holotype material, in an assemblage with low-Ni iron (kamacite), taenite, nickelphosphide (Ni-rich schreibersite), and small amounts of cohenite in a matrix of finegrained iron.

During a re-investigation of a section of the meteorite housed at the University of California, Los Angeles, Chi Ma and Alan Rubin verified the presence of a new mineral. Formation of edscottite rather than haxonite may have resulted from a lower C concentration in Wedderburn and hence a lower growth temperature. They named it edscottite in honor of Edward (Ed) R. D. Scott of the University of Hawaii, USA, a pioneering cosmochemist.