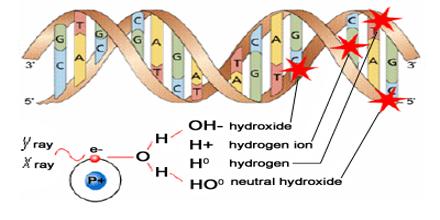 Ionizing radiation can kill or change the nature of living cells. The effects of the damage inflicted by the ionizing radiation may be severe and cause immediate effects, or not become apparent for a long time. The biological effect of radiation depends on the type of radiation; the type of body tissue or body organ that absorbs the radiation; the total amount of energy absorbed. Short-term effects usually occur when there’s a large amount of exposure to radiation. Long-Term effects take longer to become apparent and can be caused by much lower levels of radiation.