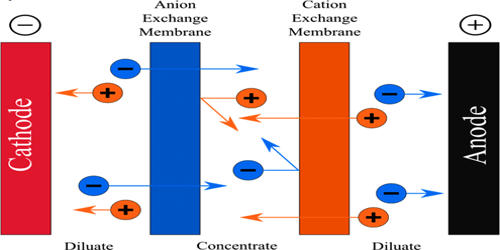 Electrodialysis (ED) is used to transport salt ions from one solution through ion-exchange membranes to another solution under the influence of an applied electric potential difference. It is a membrane process, during which ions are transported through a semi-permeable membrane, under the influence of an electric potential. It is a membrane operation for seawater or brackish water desalination. It has been employed for brackish water desalination. It is a very versatile technology for the separation of difficult mixtures.

Electrodialysis systems use a selectively permeable membrane to move ions from one side to the other under the influence of an electric potential. This is done in a configuration called an electrodialysis cell. The cell consists of a feed (dilute) compartment and a concentrate (brine) compartment formed by an anion exchange membrane and a cation exchange membrane placed between two electrodes. It is a procedure of dialysis accelerated with an electric field. Dialyser is divided into three sections. The solution flows through the middle section, between two semipermeable membranes alternately to positive ions and negative ions. The membranes are cation- or anion-selective, which basically means that either positive ions or negative ions will flow through. In almost all practical electrodialysis processes, multiple electrodialysis cells are arranged into a configuration called an electrodialysis stack, with alternating anion and cation exchange membranes forming the multiple electrodialysis cells. Cation-selective membranes are polyelectrolytes with the negatively charged matter, which rejects negatively charged ions and allows positively charged ions to flow through. Under the influence of the electric field, positive ions will travel towards the cathode (the negative electrode), and negative ions towards the anode (the positive electrode), whereby traveling of ions through the membrane are accelerated.

Electrodialysis processes are different from distillation techniques and other membrane-based processes [such as reverse osmosis (RO)] in that dissolved species are moved away from the feed stream rather than the reverse. ED is designed mainly for desalination, so if you’re using RO to remove suspended solids, total organic carbon (TOC), or other contaminants, you can stop reading now and stick with RO. Because the quantity of dissolved species in the feed stream is far less than that of the fluid, electrodialysis offers the practical advantage of much higher feed recovery in many applications.

ED has been used on an industrial scale since the 1960s and it has been in commercial use for desalination of brackish water for the past three decades, particularly for small- and medium-scale processes. ED is very useful for water treatment, aiding in the removal of mineral salts, sulfate, nitrate, etc. from brackish water and seawater. There are many applications, however, particularly in the industrial space, where brackish water desalination is integral to operations. It can also be used for the concentration of charged species in aqueous solutions. It is also being used increasingly to supplement dwindling available resources and mitigate the saltwater intrusion of aquifers. Some other applications of electrodialysis include – Water reuse, Pre-demineralization, Food processing, Glycerin purification, etc.