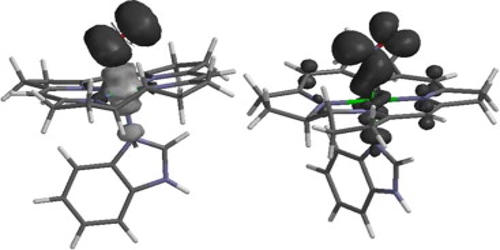 In some literature, electromerism is equated to valence tautomerism, a term usually reserved for tautomerism involving reconnecting chemical bonds. Electromeric effect refers to a molecular polarizability effect occurring by an intramolecular electron displacement characterized by the substitution of one electron pair for another within the same atomic octet of electrons. It can be observed only inorganic compounds that contain multiple bonds. It is a temporary effect that arises when the compound is subjected to an attacking reagent.

One group of electromers are excited electronic states but isomerism is usually limited to ground-state molecules. Another group of electromers is also called redox isomers: metal ions that can exchange their oxidation state with their ligands (see non-innocent ligand). One of the first instances was a cobalt bis(quinone) complex described by Buchanan and Pierpont in 1980 with a cobalt(II) complex in chemical equilibrium with the cobalt(III) complex. Ligands commonly found are based on dioxolenes, phenoxyl radicals, and polychlorotriphenylmethyl radicals. Metalloporphyrins have also been studied. A set of electromers not requiring redox-active ligands have been described as well as a set without a metal. This effect can be observed in organic compounds that contain at least one multiple bonds. When the atoms participating in this multiple bonds come under the influence of an attacking reagent, one pi bonding pair of electrons is completely transferred to one of the two atoms.