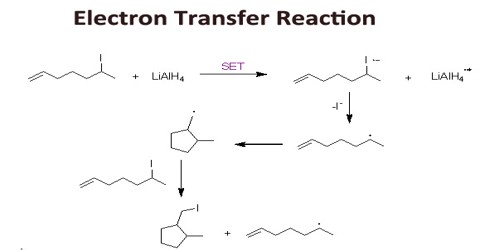 In an electron transfer reaction, an element undergoing oxidation loses electrons, whereas an element gaining electrons undergoes reduction. In the aluminum‐oxygen example, the aluminum was oxidized, and the oxygen was reduced because every electron transfer reaction involves simultaneous oxidation and reduction. These reactions are frequently called redox reactions.

Electron transfer, or the act of moving an electron from one place to another, is amongst the simplest of chemical processes, yet certainly one of the most critical. Without stringent control of electrons in living organisms, life could simply not exist. Transition metals such as copper and iron play leading roles in electron transport as one-electron redox-active centers within proteins that are used to effectively move electrons around. There are several classes of electron transfer, they are: Chemical Methods. As an example of the formation of anion radicals by chemical methods, we have already considered the transfer of an electron from sodium or potassium metal to a neutral substrate, such as benzophenone (to form the ketyl). A chemical method for forming cation radicals which was emphasized was the use of a stable aminium salt to ionize an electron from an organic substrate. Photochemical Methods. Besides the chemical and electrochemical methods of generation, there are also some very efficient photochemical methods. The most common approach is to use a photosensitizer to absorb uv light, and to allow the resulting excited state of the photosensitizer to remove an electron to an organic substrate (or to transfer an electron to the organic substrate). This is illustrated for the case of 1,4-dicyanobenzene as the photosensitizer. If, for example, 1,3-cyclohexadiene is the substrate, this results in a cation radical chain process which forms the previously mentioned Diels-Alder dimers.