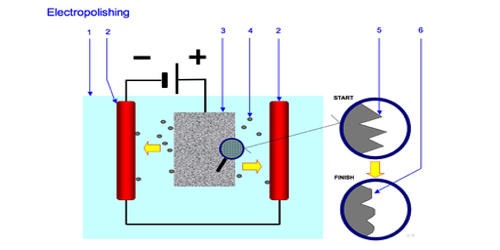 Electropolishing removes a microscopically precise layer of surface material, to tolerances as low as +/-.0001″, depending on the alloy. It is used to polish, passivate, and deburr metal parts. It is often described as the reverse of electroplating. It may be used in lieu of abrasive fine polishing in microstructural preparation. Electropolishing is a one-step process for a micro-smooth, ultraclean, corrosion, and pathogen-resistant surface finish – with 30 times more corrosion resistance than passivation.

Under the action of direct current, metal is removed from the workpiece surface in an electrolyte. Typically, the work-piece is immersed in a temperature-controlled bath of electrolyte and serves as the anode; it is connected to the positive terminal of a DC power supply, the negative terminal is attached to the cathode. The component to be electropolished forms the positive pole (anode) and the cathode the negative pole, which completes this electric cell. A current passes from the anode, where metal on the surface is oxidized and dissolved in the electrolyte, to the cathode. If the current flow is switched on, the metal dissolves on the anode surface and dissolves within the electrolyte. At the cathode, a reduction reaction occurs, which normally produces hydrogen. The material removal can be specifically determined by the respective electrolyte, the current density, and the polishing time. 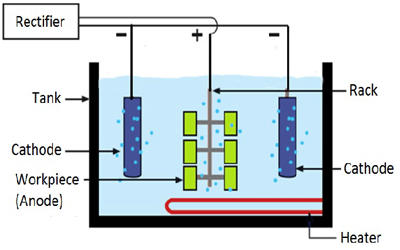 Fig: temperature-controlled bath of electrolyte and serves as the anode

Electrolytes used for electropolishing are most often concentrated acid solutions having high viscosity, such as mixtures of sulfuric acid and phosphoric acid. A feature of electropolishing is that the process is initiated only under the influence of current so that the polishing can be carried out precisely according to the targets.

Electropolishing offers many advantages over the mechanical processing of metal surfaces. Due to its ease of operation and its usefulness in polishing irregularly-shaped objects, electropolishing has become a common process in the production of semiconductors.