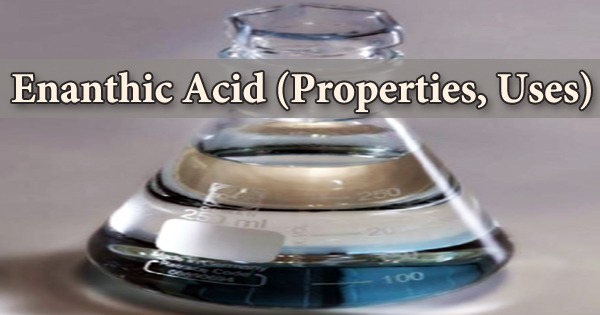 Enanthic acid, also known as heptanoic acid, is a seven-carbon linear chain saturated fatty acid with an unpleasant, rancid, and pungent odor. It is commonly used as a chemical intermediate in the synthesis of esters for products like ethyl heptanoate, which are used in fragrances and artificial flavors. It adds to the rancidity of some oils. Water is modestly soluble, but ethanol and ether are quite soluble. Enanthates or heptanoates are the salts and esters of enanthic acid. This substance belongs to the medium-chain fatty acid family of chemical substances. Fatty acids having an aliphatic tail of 4 to 12 carbon atoms are known as aliphatic fatty acids. It’s also used in the cosmetics industry to make emollients, skin conditioning agents, and viscosity control agents.

Due to its low viscosity at low temperatures and low volatility at high temperatures, enanthic acid can also be used as an industrial lubricant in the fields of aviation, refrigeration, and automobiles. It gets its name from the Latin oenanthe, which comes from the Ancient Greek words oinos “wine” and anthos “blossom.” Furthermore, heptanoic acid’s excellent anti-corrosion properties lead to its use in metalworking fluids, industrial water-based refrigerants, and anti-corrosion paint additives. The main commercial precursor of enanthic acid is the methyl ester of ricinoleic acid, which is produced from castor bean oil. It is pyrolyzed to produce the methyl ester of 10-undecenoic acid and heptanal, which is subsequently air-oxidized to produce the carboxylic acid.

Enanthic acid, also known as heptanoic acid, is used to esterify steroids in the pharmaceutical industry to create medications such as testosterone enanthate, trenbolone enanthate, drostanolone enanthate, and methenolone enanthate, as well as being one of several additives in cigarettes. A slight tallow-like odor emanates from the spectroscopically pure acid. Heptaldehyde can be made into this acid by oxidizing it with potassium permanganate in diluted sulfuric acid. Calamus, hops, Acacia dealbata, Japanese peppermint, and violet leaves have all been reported to contain it naturally.

Enanthic acid, also known as heptanoic acid, is used to make esters like ethyl heptanoate, which are utilized in fragrances and fake flavors. It is used to esterify steroids in the manufacture of testosterone enanthate, trenbolone enanthate, drostanolone enanthate, and methenolone enanthate (Primobolan), among others. It’s also one of a number of additives found in cigarettes. Triheptanoin is the triglyceride ester of enanthic acid, which is utilized as a dietary supplement in specific medical conditions.

If ingested, breathed, or absorbed via the skin, this acid is toxic. Mucous membranes, upper respiratory tract, skin, and eyes are all severely damaged. As a result of spasm, inflammation, and edema of the larynx and bronchi, chemical pneumonitis, and pulmonary edema, inhalation can be lethal. Over the last few years, the use of heptanoic acid in high-water metalworking fluids has increased by more than 20%. Because the amount of acid utilized in these products is so little, a considerable shift away from typical oil-based fluids would be required before a significant market impact could be realized.