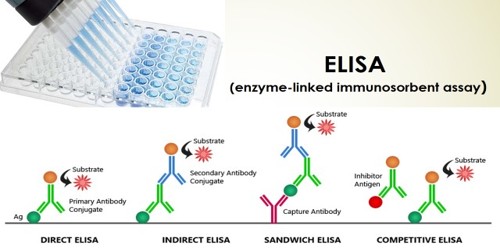 The ELISA method (Enzyme-Linked Immuno-Sorbent Assay) is a technique used in biochemistry to determine if a certain substance–such as a specific cytokine or antigen–is present within a sample. It is sometimes abbreviated as “EIA.” It is a plate-based assay technique designed for detecting and quantifying substances such as peptides, proteins, antibodies, and hormones. Also, ELISAs are useful in measuring antigen and antibody concentration. They are sensitive and specific, as well as relatively inexpensive, making them useful as preliminary diagnostic tools.

In an ELISA, an antigen must be immobilized on a solid surface and then complexed with an antibody that is linked to an enzyme. This technique uses special antibodies that attach themselves to the substance. These antibodies generate a specific color. Mainly, antibodies and color changes are used to identify target substances. The amount of color indicates the amount of substance present. (Sometimes, the substance must be viewed under ultraviolet light for the antibodies to generate this color.) A wide range of enzyme-linked immunoassays (EIAs), the most widely used IVD assays in clinical diagnostics, have been developed. The most crucial element of the detection strategy is a highly specific antibody-antigen interaction. The sensitivity and precision of the assay are enhanced by coating the plate with high-affinity antibodies.

Another set of antibodies is used to “capture” the substance. These antibodies adhere to both the substance and the testing container, thus holding the substance in place. ELISAs can be performed with a number of modifications to the basic procedure: direct, indirect, sandwich or competitive.

A more sophisticated and sensitive technique, the ELISPOT method, was derived from the ELISA technique. ELISA has been implemented in diagnostics as well as for quality-control programs throughout a number of industries. They are widely used, for example, in human immunodeficiency virus (HIV) testing and similar applications.