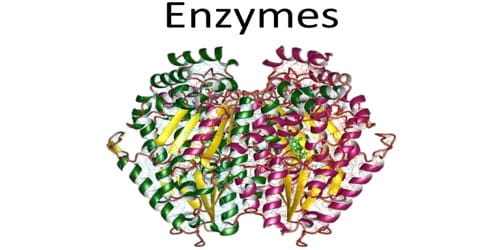 The first enzyme was found in 1833 by Anselme Payen.

There are thousands of different enzymes and each one is specific to the reaction which it catalyzes. They are built of proteins folded into complicated shapes; they are present throughout the body. Examples of this include ATP synthase. It makes a chemical called ATP. Another example is DNA polymerase. It reads an intact DNA strand and uses it as a template to make a new strand.

are made from amino acids, and they are proteins. The proteases are a whole class of enzymes. They break down other enzymes and proteins back into amino acids. Nucleases are enzymes that cut DNA or RNA, often in a specific place in the molecule.

Most enzymes will not work unless the temperature and pH are just right. In mammals, the right temperature is usually about 37oC degrees (body temperature). The correct pH can vary greatly. Pepsin is an example of an enzyme that works best when pH is about 1.5.

Enzymes have been classified by the International Union of Biochemistry. Their Commission on Enzymes has grouped all known enzymes into six classes:

Enzymes are used commercially for: