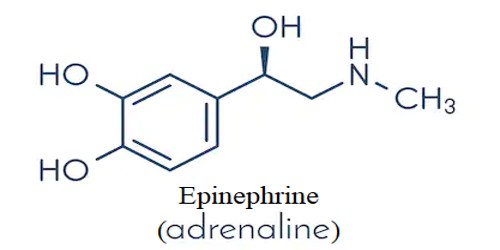 Epinephrine, more commonly known as adrenaline, is a hormone secreted by the medulla of the adrenal glands. It is a hormone and medication. It is found in small amounts in the body and is essential for maintaining cardiovascular homeostasis because of its ability to divert blood to tissues under stress. It is a catecholamine, a sympathomimetic monoamine derived from the amino acids phenylalanine and tyrosine.

The hormone was first isolated and purified in 1901 by Japanese chemist Jokichi Takamine. It was patented in the United States with the name “adrenaline.”

Effects in the body

Tachycardia (a fast heart rate) or heart palpitations (feeling the heart-pounding inside the chest), because epinephrine makes the heart beat harder and faster

Epinephrine is used to treat a few different medical problems.

Epinephrine can restart a person’s heart when they are in cardiac arrest (their heart has stopped beating). It can make the heart start pumping blood to the rest of the body again.

Epinephrine is the best medicine to treat anaphylaxis, which is a very bad allergic reaction. During anaphylaxis, the bronchi (which brings air to the lungs) get narrower and narrower until the person cannot breathe.

Epinephrine can be given for asthma attacks if regular asthma medications like albuterol do not work.

Croup is a disease that mostly happens in children, and is caused by a virus. It can cause swelling in the throat, which can make it hard to breathe.