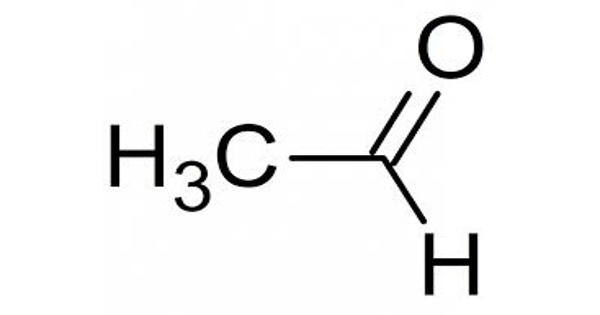 Ethanal is an organic chemical compound with the formula CH3CHO, sometimes abbreviated by chemists as MeCHO (Me = methyl). It is a widespread, naturally occurring, colorless, and flammable liquid with a suffocating smell. It is one of the most important aldehydes, occurring widely in nature and being produced on a large scale in the industry. This substance is widely used in the manufacture of acetic acid, perfumes, dyes, and drugs, as a flavoring agent and as an intermediate in the metabolism of alcohol. It is an aldehyde that is highly reactive and toxic.

It is also known as, acetaldehyde, which occurs naturally in coffee, bread, and ripe fruit, and is produced by plants. It is a flammable, colorless liquid with a pungent, fruity odor. It is also produced by the partial oxidation of ethanol by the liver enzyme alcohol dehydrogenase and is a contributing cause of hangover after alcohol consumption. It has been manufactured by the hydration of acetylene and by the oxidation of ethanol (ethyl alcohol).

Pathways of exposure include air, water, land, or groundwater, as well as drink and smoke. It is the aldehyde formed from acetic acid by reduction of the carboxy group. Consumption of disulfiram inhibits acetaldehyde dehydrogenase, the enzyme responsible for the metabolism of acetaldehyde, thereby causing it to build up in the body.

The International Agency for Research on Cancer (IARC) has listed acetaldehyde as a Group 1 carcinogen. Acetaldehyde is “one of the most frequently found air toxins with cancer risk greater than one in a million”.

The ethanal can be prepared by the ethyne by treating the ethyne with mercuric sulphate in presence of acid. First, the mercury attacks the reactant ethyne and forms a cyclic structure. Then water attacks on this cyclic structure forming a mercury cation. Then by the removal of hydride alcohol forms.

The diluted sulfuric acid is heated to boiling and 200 g of sodium dichromate in 200 ml of water which has been treated with 100 g of ethyl alcohol is then added in a small portion through the dropping funnel. During the addition of the sodium dichromate heat evolves and causes ebullition of the reaction mixture.

Ethanal is a colorless volatile pungent liquid, miscible with water, used in the manufacture of organic compounds and as a solvent and reducing agent.