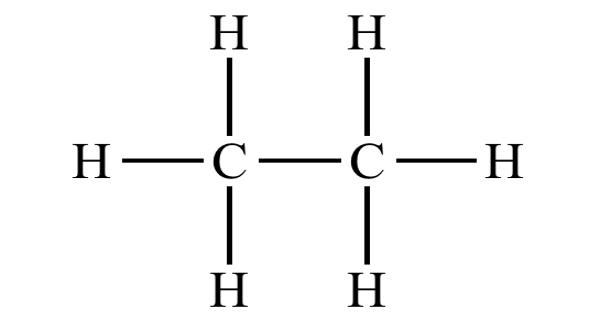 Ethane is an organic chemical compound with the chemical formula C2H6. It is a colorless, odorless, gaseous hydrocarbon (compound of hydrogen and carbon), belonging to the paraffin series. At standard temperature and pressure, ethane is a colorless, odorless gas. It is structurally the simplest hydrocarbon that contains a single carbon–carbon bond. Like many hydrocarbons, ethane is isolated on an industrial scale from natural gas and as a petrochemical by-product of petroleum refining. It is easily ignited. The vapors are heavier than air. Its chief use is as feedstock for ethylene production. It can asphyxiate by the displacement of air.

Related compounds may be formed by replacing a hydrogen atom with another functional group; the ethane moiety is called an ethyl group. It is an alkane comprising of two carbon atoms. It is a gas molecular entity and an alkane. For example, an ethyl group linked to a hydroxyl group yields ethanol, the alcohol in beverages. The second most important constituent of natural gas, it also occurs dissolved in petroleum oils and as a by-product of oil refinery operations and of the carbonization of coal.

At standard temperature and pressure, ethane is a colorless, odorless gas. It has a boiling point of −88.5 °C (−127.3 °F) and a melting point of −182.8 °C (−297.0 °F). Solid ethane exists in several modifications. On cooling under normal pressure, the first modification to appear is a plastic crystal, crystallizing in the cubic system. Ethane is only very sparingly soluble in water.

After methane, ethane is the second-largest component of natural gas. Today, ethane is an important petrochemical feedstock and is separated from the other components of natural gas in most well-developed gas fields. Ethane can also be separated from petroleum gas, a mixture of gaseous hydrocarbons produced as a byproduct of petroleum refining. Economics of building and running processing plants can change, however.

For the removal of various impurities, oil and natural gas must be processed at first production. Ethane is most efficiently separated from methane by liquefying it at cryogenic temperatures. The processing of natural gas removes hydrocarbons such as ethane, butane, propane, and other hydrocarbons from the gas stream, as well as water and other impurities. Various refrigeration strategies exist: the most economical process presently in wide use employs a turboexpander, and can recover more than 90% of the ethane in natural gas. In this process, chilled gas is expanded through a turbine, reducing the temperature to about −100 °C (−148 °F). At this low temperature, gaseous methane can be separated from the liquefied ethane and heavier hydrocarbons by distillation.

Ethane can be formed from the electrolysis of acetate salts: