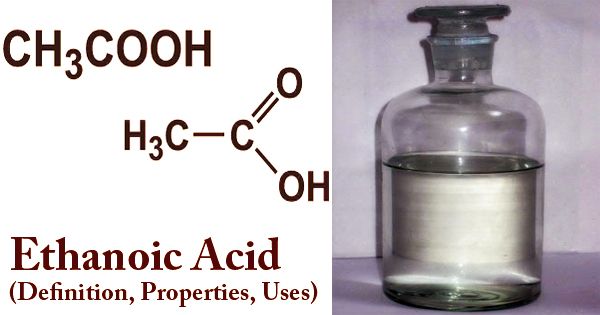 A colorless liquid or crystal with a bitter, vinegar-like odor, ethanoic acid (/ˌɛθəˈnoʊɪk/), also known as acetic acid (/əˈsiːtɪk/), is one of the simplest carboxylic acids and is an extensively used chemical reagent. Its chemical formula is CH3COOH (also written as CH3CO2H, C2H4O2, or HC2H3O2). With a density of 1.05 g/cm3, it is slightly heavier than water. It becomes vinegar after injecting 5-8 percent of ethanoic acid into water and is often used in pickles as preservatives. Ethanoic or Acetic acid is commonly used as a laboratory reagent, primarily for photographic film and polyvinyl acetate for wood glue, synthetic fibers, and cloth products in the manufacture of cellulose acetate. As a decaling agent and acidity regulator in the food industry, it has also been of great value.

Ethanoic acid is known as a weak acid because it dissociates only partially in solution, but concentrated acetic acid is corrosive and is capable of attacking the skin. Since its melting point is 16oC, this acid is often referred to as glacial acetic acid. Hence, when the atmosphere is cold, it also freezes in winter. It is the second most essential carboxylic acid in the world (after formic acid). It consists of a methyl group to which a carboxyl group is added. In most plants and animal tissues, ethanoic acid and acetate are found in small yet detectable quantities. They are natural metabolic intermediates and are produced by bacterial species such as Acetobacter, and microorganisms such as Clostridium thermoaceticum can synthesize them entirely from carbon dioxide. 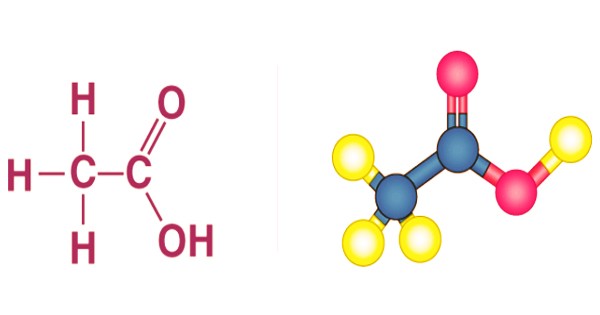 Global demand for ethanoic acid or acetic acid is approximately 6.5 million metric tons (Mt/a) per year, of which approximately 1.5 Mt/a is met through recycling; the remainder is methanol-based. Most of the vinegar is diluted acetic acid, sometimes formed by fermentation and subsequent ethanol oxidation. Vinegar and pyroligneous acid are the primary components of ethanoic acid. In 1986, more than 27 million lb were applied to food in the form of vinegar, with nearly equivalent quantities used as acids and flavoring agents. Probably, one of the first flavoring agents was acetic acid (like vinegar).

The addition of a component of ethanoic/acetic acid (vinegar) to the salt or sugar-yolk in the manufacture of mayonnaise decreases Salmonella’s heat tolerance. Acetic acid or its sodium salt is frequently used in the water-binding composition of sausages, while calcium acetate is used to preserve the texture of sliced, canned vegetables. The molecules form chains in solid acetic acid, with individual molecules being interconnected by hydrogen bonds. At 120 °C (248 °F), dimers can be found in the vapor. In the liquid phase, dimers often occur in dilute solutions in non-hydrogen-bonding solvents and, to a certain degree, in pure acetic acid, but are interfered with by solvents that bind to hydrogen.

The compound that is formed is known as an ester when carboxylic acid and alcohol react. An example of the formation of an ester from an ethanoic acid reaction with absolute ethanol in the presence of an acid as a catalyst is given below:

Liquid acetic acid, identical to ethanol and water, is a hydrophilic (polar) protic solvent. It dissolves not only polar compounds such as inorganic salts and sugars but also non-polar compounds such as oils as well as polar solutes with a mild relative static permittivity (dielectric constant) of 6.2. A weak carboxylic acid with a potent odor that persists as a liquid at room temperature is ethanoic acid or acetic acid. It was possibly the first acid to be processed in large amounts. The term acetic derives from acetum, which is the word for “sour” in Latin and refers to the fact that the bitter taste of fermented juices is responsible for acetic acid. 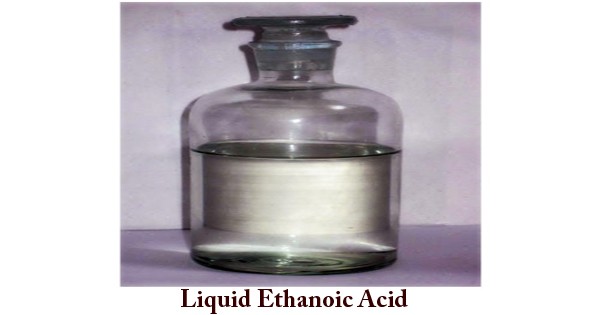 When ethanoic acid responds with carbonates and hydrogen carbonates, carbon dioxide, salt, and water are formed. As ethanoic acid reacts with sodium bicarbonate, sodium acetate is commonly released as salt, as seen in the reaction below:

The solvent and miscibility properties of acetic acid make it a valuable industrial chemical in the manufacture of dimethyl terephthalate, for instance, as a solvent. Ethanoic acid or acetic acid are made naturally by fermenting fruits. Some bacteria, such as the highly common Acetobacter species, also excrete it. There are many processes, such as methanol carbonylation and methyl acetate carbonylation, to artificially create acetic acid.

In reality, ethanoic acid or acetic acid is used in the production of cellulose acetate, rayon acetate, and various compounds of acetate and acetyl; as a solvent for gums, oils, and resins; as a food preservative for printing and dyeing; and in organic synthesis. In labs, but even on a wider industrial scale, it typically acts as a chemical reagent. Acetic acid is used in pharmaceutical firms to produce other chemicals. Ethanoic acid or acetic acid is also a part of human and other primates’ vaginal lubrication, where it tends to act as a mild antibacterial agent.

As a cleaning and degreasing solvent, ethanoic or acetic acid is sometimes used. It can be used for inorganic film etching. In photographic components, such as film and chemical solutions, this acid is widely used. It is also used in the petroleum industry and is used for surface plating and treatment, such as on automobiles. In the manufacture of pharmaceuticals, acetic acid is also used. In order to suppress fungal and bacterial growth, farmers sometimes spray ethanoic or acetic acid on livestock silage. It is used in pest-control agents such as herbicides and insecticides and is a part of anti-freeze and de-icing agents. It’s a part of some polished cars.

In aqueous and non-aqueous acid-base titrations, ethanoic or acetic acid are also used. The production of vinyl acetate monomer is the largest single use of this acid, closely followed by the production of acetic anhydride and ester. In vinegar, the amount of acetic acid used is comparatively small. Therefore, topical ethanoic or acetic acid can be effectively used to treat the wounded in the field or in remote areas, particularly in war zones. Wounds cannot be as serious if treated with this topical acetic acid early on.