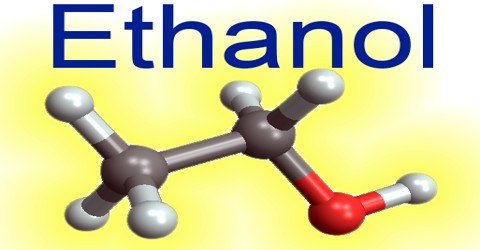 Ethanol is an alcohol fuel that’s distilled from plant materials, such as corn and sugar. It is also called alcohol, ethyl alcohol, and drinking alcohol, is the principal type of alcohol found in alcoholic beverages. Its chemical formula is C2H6O, which can be written also as CH3-CH2-OH or C2H5-OH (an ethyl group linked to a hydroxyl group), and is often abbreviated as EtOH. Ethanol is the systematic name defined by the International Union of Pure and Applied Chemistry (IUPAC) for a compound consisting of alkyl group with two carbon atoms (prefix “eth-“), having a single bond between them (infix “-an-“), attached functional group-OH group (suffix “-ol”). Growing corn and other plants for ethanol production requires a lot of farmland, monopolizing fertile soil which instead could be used to grow food. Corn production is especially needy in terms of synthetic fertilizer and herbicide, and frequently leads to nutrient and sediment pollution. According the production of corn-based ethanol as an alternative fuel may end up requiring more energy than the fuel can generate, especially when counting the high energy costs of synthetic fertilizer production.

Formula and Structure of Ethanol

Ethanol, which can also be abbreviated as EtOH, is a colorless liquid with a slight odor, and it is soluble in water. It is flammable and volatile, so it evaporates easily when left in an open container. It is also commonly referred to as ethyl alcohol, pure alcohol, grain alcohol, and drinking alcohol, is most known as the alcohol present in alcoholic beverages. Its chemical formula can also be written as CH3CH2OH or C2H5OH. It is made of nine atoms that include two carbon (C) atoms, six hydrogen (H) atoms, and one oxygen (O) atom.

High concentrations of ethanol in human body can interfere with the brain functions and can cause poisoning. When mixed with gasoline, usually in the proportion 85 percent ethanol to 15 percent gasoline, it is known as gasohol.

Ethanol has been detected in outer space, forming an icy coating around dust grains in interstellar clouds. Minute quantity amounts (average 196 ppb) of endogenous ethanol and acetaldehyde were found in the exhaled breath of healthy volunteers. Auto-brewery syndrome, also known as gut fermentation syndrome, is a rare medical condition in which intoxicating quantities of ethanol are produced through endogenous fermentation within the digestive system. Trees and grasses have much of their sugars locked up in a fibrous material called cellulose, which can be broken down into sugars and made into ethanol. By-products of forestry operations can be used for cellulosic ethanol: sawdust, wood chips, and branches. Crop residues can also be used, such as corn cobs, corn leaves, or rice stems.

Most ethanol is produced using a four-step process:

This all process involves a steeping period after which the grain germ, oil, starch, and gluten are all separated and further processed into many useful byproducts. High-fructose corn syrup is one of them, and is used as a sweetener in many prepared foods. Corn oil is refined and sold. Gluten is also extracted during the wet milling process, and is sold as a feed additive for cattle, hogs, and poultry.