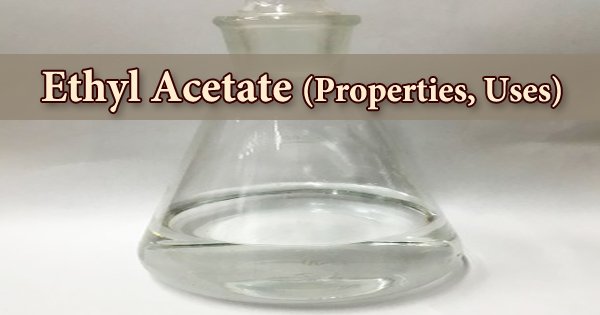 The acetate ester formed between acetic acid and ethanol is ethyl acetate (systematically ethyl ethanoate, commonly abbreviated EtOAc, ETAC, or EA). It is a transparent colorless liquid with a fruity odor. It is the organic compound with the formula CH3−COO−CH2−CH3, simplified to C4H8O2. Ethyl acetate is a polar aprotic solvent with two dipole moments formed by the carbonyl and ethyl groups’ two strong electronegative oxygen atoms. This colorless liquid, which smells like pear drops and is used in glues, nail polish removers, and the decaffeination of tea and coffee, is used in glues, nail polish removers, and in the decaffeination process.

The ester of ethanol and acetic acid, ethyl acetate is produced in large quantities for use as a solvent. It acts as a polar aprotic solvent, an inhibitor of EC 3.4.19.3 (pyroglutamyl-peptidase I), a metabolite, and a metabolite of Saccharomyces cerevisiae. Alcoholic drinks, cereal crops, radishes, fruit juices, beer, wine, and spirits all contain ethyl acetate. It has a fruity taste that can be detected in glues, nail polish removers, decaffeinating tea and coffee, and cigarettes. This chemical is widely used and manufactured on a large scale around the world, with over 1 million tons produced annually due to its pleasant aroma and low cost.

Ethyl acetate is a volatile organic compound that is an acetate ester, an ethyl ester, and an acetate ester. In 1759, Count de Lauraguais produced it by distilling a mixture of ethanol and acetic acid. In 2004, the global output of 1.3 million tonnes was projected. In 1985, Japan, North America, and Europe collectively produced about 400,000 tonnes. In 2018, the global ethyl acetate market was worth $3.3 billion. Many chemistry students are acquainted with ethyl acetate, which is also the ester with the most applications. Esters are made by substituting an alkyl or aryl group for the acidic hydrogen in carboxylic acids. Ethyl acetate itself is a colourless liquid at room temperature with a pleasant “fruity” smell, b.p. 77°C.

The reaction between ethanol and acetic acid produces ethyl acetate. The Fischer esterification reaction is the most commonly used commercially, but the Tishchenko reaction is another choice. At room temperature, this mixture converts to the ester in a 65 percent yield:

Acid catalysis can speed up the reaction, and removing water from the equation can change the equilibrium to the right. In industry, it’s made by mixing two equivalents of acetaldehyde in the presence of an alkoxide catalyst using the Tishchenko reaction:

Despite the fact that the Teshchenko Reaction uses only one feed and is non-corrosive, acetaldehyde is difficult to manage because it is not readily available outside of the petrochemical industry. In these conditions, an improved ethyl acetate production process is highly desirable. By alkylation of acetic acid with ethylene, silicotungstic acid is used to make ethyl acetate:

Alcoholic drinks, cereal crops, radishes, fruit juices, beer, wine, and spirits all contain ethyl acetate. When freshly dissolved in water, it has a fruity sweet flavor. By amount, it is potentially one of the most widely used flavor chemicals. Moisture slowly decomposes ethyl acetate, which then becomes acidic due to the formation of acetic acid. It was discovered in the air of a traffic tunnel. Ethyl acetate was detected in air samples from both cities and rural areas. As ethyl acetate is released into the atmosphere, it degrades quickly in the air. It would easily evaporate from the surface of the soil or water.

Ethyl acetate is used to make artificial silk and leather, perfumes, and photographic films and plates, as well as a solvent for varnishes, lacquers, and nitrocellulose. It can be used in sweets, perfumes, and fruits. It evaporates rapidly in perfumes, leaving only the perfume’s scent on the skin. Ethyl acetate is a powerful asphyxiant that can be used to collect and research insects. This material is typically charged into a jar by etymologists. Its vapors can kill the collected (usually adult) insect quickly but not fully. The insect remains soft enough to make mounting suitable for a set because ethyl acetate is not hygroscopic.