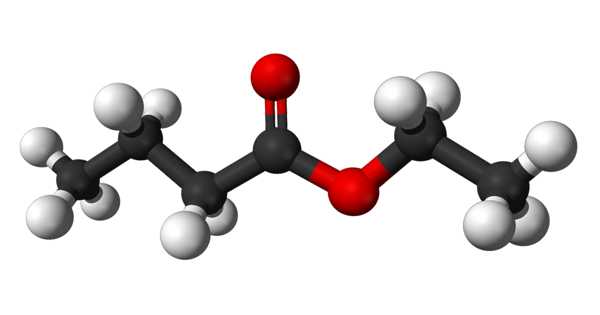 Ethyl butyrate is an ester with the chemical formula CH3CH2CH2COOCH2CH3. It is also known as ethyl butanoate or butyric ether. It is a colorless, volatile, nontoxic liquid with a pineapple odor that is primarily used in flavoring extracts and the production of perfumes and sprays. Propylene glycol, paraffin oil, and kerosene are all soluble in it. It has a fruity odor, similar to pineapple, and is a key ingredient used to enhance the flavor of processed orange juices. It is also found naturally in a variety of fruits, albeit in lower concentrations. It has a fruity aroma that is similar to pineapple. It is found naturally in a variety of fruits.

Ethyl butyrate is a colorless, clear liquid with a pineapple-like odor. The flashpoint is 78°F. It has a lower density than water and is insoluble in water. It contains vapors that are heavier than air.

Ethyl butyrate is a butyrate ester formed by the formal condensation of ethanol’s hydroxy group and butyric acid’s carboxy group. It functions as a plant metabolite. It is derived from ethanol.

It is commonly used as an artificial flavoring that resembles orange juice and is thus found in nearly all orange juices sold, including those labeled “fresh” or “concentrated.” It is also used in alcoholic beverages (such as martinis and daiquiris), as a solvent in perfumery products, and as a cellulose plasticizer.

One of the most common chemicals used in flavors and fragrances is ethyl butyrate. It comes in a wide range of flavors, including orange (the most common), cherry, pineapple, mango, guava, bubblegum, peach, apricot, fig, and plum. It is also one of the cheapest chemicals in industrial use, which adds to its popularity.

It can be made by combining ethanol and butyric acid. This is a condensation reaction, which means that water is produced as a byproduct. Stable Isotope Ratio Analysis can distinguish natural ethyl butyrate from synthetic ethyl butyrate (SIRA).

One of the first reports on odor–taste interactions found that the fruity odor of ethyl butyrate and the sweet taste of saccharin combine additively at suprathreshold levels. Indeed, the perceived intensity of the odor–taste mixture was nearly equal to the sum of the stimuli’s individual intensities.