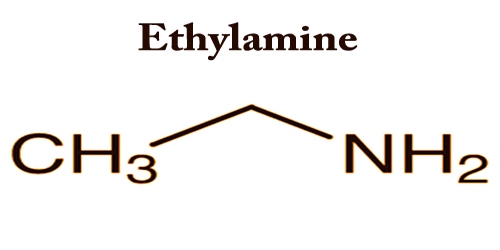 Ethylamine is a simple aliphatic amine; it is an organic compound with the formula CH3CH2NH2. It appears as a colorless liquid or a gas (boiling point 62°F) with an odor of ammonia. Ethylamine and nearly all solvents are miscible. It is commonly used in the chemical industry and synthesis of organic matter.

Ethylamine was soluble in all amounts of water; soluble in ethanol, methanol, hydrocarbons for paraffin, aromatic and aliphatic hydrocarbons, ethyl ether, ethyl acetate, acetone, and mineral oil. Its flash point less than 0°F; the density of liquid 5.7 lb/gal. Two processes manufacture ethylamine to a large scale. Most commonly ethanol and ammonia are combined in the presence of an oxide catalyst:

Ethylamine, also called aminoethane or ethylamine, is co-produced with diethylamine and triethylamine. In aggregate, approximately 80M kilograms/year of these three amines are produced industrially. It is also produced by the reductive amination of acetaldehyde.

Ethylamine is a component of normal human urine it’s been suggested that this short-chain aliphatic chain plays a significant role within the central systema nervosum disturbances observe during hepatic and renal disease especially when the blood-brain barrier is compromised. Hydrogenation of acetonitrile, acetamide, and nitroethane afford ethylamine. it’s strong alkaline and might react with a mineral acid to create water-soluble salt. It can even react with acyl to make acyl amide and react with acid to get nitrosamines.

In another route, ethylamine may be synthesized via nucleophilic substitution of a haloethane (such as chloroethane or bromoethane) with ammonia, utilizing a powerful base like hydrated oxide. It is often oxidized to make hydroxylamine or oxime. Ethylamine can react with phosgene to create carbonyl chloride and react with acrylonitrile to get aminopropionitrile. It can strongly stimulate the skin and mucous membranes.

Ethylamine is also formed in the universe, naturally; it is a part of interstellar gases. Exposure to extreme heat from the closed container will cause it to rupture violently and rocket. Like other simple aliphatic amines, ethylamine is a weak base: the pKa of (CH3CH2NH3)+ has been determined to be 10.8. Ethylamine is used primarily for the manufacture of Atrazine (selective herbicides) and Simazine (dry field pre-emergence herbicides) as the raw materials of triazine herbicides.