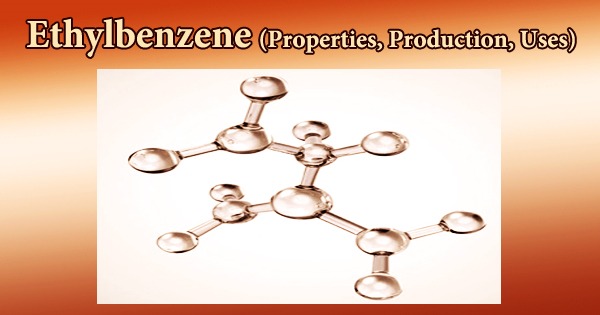 Ethylbenzene is a colorless, flammable liquid with a gasoline-like odor; it is an organic chemical with the formula C6H5CH2CH3. It can be found in both natural and produced items, such as coal tar and petroleum, as well as inks, pesticides, and paints. It is produced through a Friedel–Crafts reaction from ethene and ethybenzene and is used to make phenylethane (for polystyrene). This monocyclic aromatic hydrocarbon is used in the petrochemical sector as an intermediary in the manufacturing of styrene, which is used to make polystyrene, a common plastic.

Except for a very minor proportion recovered from mixed C8 aromatics by super fractionation, ethylbenzene is made through alkylation of benzene with ethylene. Ethylbenzene is most commonly used as an intermediary in the manufacturing of polystyrene. Hydrogen and styrene are produced through catalytic dehydrogenation of ethylbenzene:

Ethylbenzene is a clear, colorless liquid with a pleasant scent. 59°F is the flash point. Water-insoluble and less dense than water (at 7.2 lb/gal). As a result, it floats on water, and vapors are heavier than air. It is used as an anti-knock additive in gasoline to eliminate engine knocking and raise the octane rating. Pesticides, cellulose acetate, synthetic rubber, paints, and inks are all examples of ethylbenzene-containing products. Ethylbenzene is a chemical that is used to recover natural gas and can be injected into the ground.

Ethylbenzene is a member of the alkylbenzene family of compounds. These are aromatic compounds with one or more benzene substituents. is made by mixing benzene and ethylene in an acid-catalyzed chemical process on a massive scale.:

An alkylbenzene with an ethyl substituent is known as ethylbenzene. It can be found in coal tar and petroleum. It can be found in both natural and produced items, such as coal tar and petroleum, as well as inks, pesticides, and paints. Ethylbenzene is mostly used to create styrene, a chemical. Other use includes as a solvent, in fuels, and in the production of other compounds. Commercially, it’s made from benzene and ethylene.

Super fractioning, an extension of the distillation process, is used to recover small amounts of ethylbenzene from a mixture of xylenes. Ethylbenzene is now widely employed in the manufacturing of styrene monomer on a massive scale. A number of chemical procedures can make ethylbenzene, but one that has had a lot of commercial success is the alkylation of benzene with ethylene in the presence of a solid, acidic zeolite catalyst.

Humans are primarily exposed to ethylbenzene by inhalation, with 40-60% of breathed ethylbenzene remaining in the lungs. Ethylbenzene has a modest acute toxicity, with an LD50 of roughly 4 grams per kilogram of body weight. The long-term toxicity and carcinogenicity of this substance is unknown. Ethylbenzene exposure has been linked to hearing loss, neurobehavioral function impairment, and neurotransmitter imbalance, and it is a liver microsomal enzyme inducer.

Because it can easily migrate from water and soil, ethylbenzene is typically found as a vapor in the air. In 1999, urban air had a median content of 0.62 parts per billion (ppb). According to the EU Dangerous Substances Directive, ethylbenzene is not a dangerous substance to the environment as of 2012. It’s a component of cigarette smoke. Because ethylbenzene is a component (15-20%) of commercial xylene (“mixed xylenes”), it is employed as a solvent, a diluent in paints and lacquers, and a solvent in the rubber and chemical production sectors.

When exposed to heat or flame, it is an extremely serious fire and explosion hazard; it can react violently with oxidizing compounds. The activated -methylene group of ethylbenzene undergoes the most oxidation, yielding methylphenylcarbinol, which is also a precursor to hippuric and mandelic acids. Both optical isomers of methylphenylcarbinol are produced in almost equal proportions, and the matching glucuronides have been identified from rabbit urine.