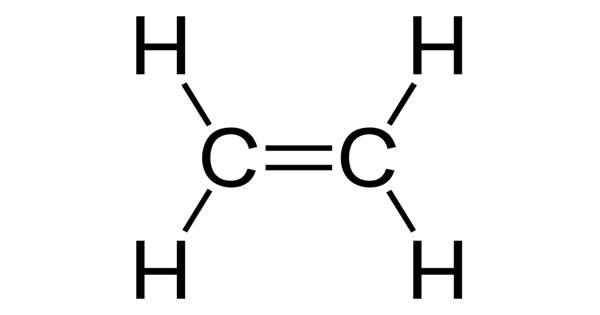 Ethylene appears as a colorless gas with a sweet odor and taste. It is a hydrocarbon that has the formula C2H4 or H2C=CH2. It is the simplest of the organic compounds known as alkenes, which contain carbon-carbon double bonds. It is a colorless flammable gas with a faint “sweet and musky” odor when pure. It is a colorless, flammable gas having a sweet taste and odor. It is the simplest alkene (a hydrocarbon with carbon-carbon double bonds). It is lighter than air. It is easily ignited and a flame can easily flashback to the source of the leak.

Ethene is the IUPAC name for ethylene. It has a “sweet and musky” odour when it is pure.

Natural sources of ethylene include both natural gas and petroleum; it is also a naturally occurring hormone in plants, in which it inhibits growth and promotes leaf fall, and in fruits, in which it promotes ripening. It is biologically active at very low concentrations of around 0.01 to 1.0 part per million (ppm). It is an important industrial organic chemical. Lower or higher sensitivities have been observed depending on the species and the response. It is produced by heating either natural gas, especially its ethane and propane components, or petroleum to 800–900 °C (1,470–1,650 °F), giving a mixture of gases from which the ethylene is separated.

Ethylene is widely used in the chemical industry, and its worldwide production exceeds that of any other organic compound. It is used in a range of industries and applications including:

Much of this production goes toward polyethylene, a widely used plastic containing polymer chains of ethylene units in various chain lengths. It is abundantly used in the chemical industry, and the polyethene is extremely produced using ethylene. Ethylene is also an important natural plant hormone and is used in agriculture to force the ripening of fruits. Ethylene gas is a plant hormone that accelerates respiration in fresh fruits and vegetables leading to maturity, senescence and softening of tissues. The hydrate of ethylene is ethanol.