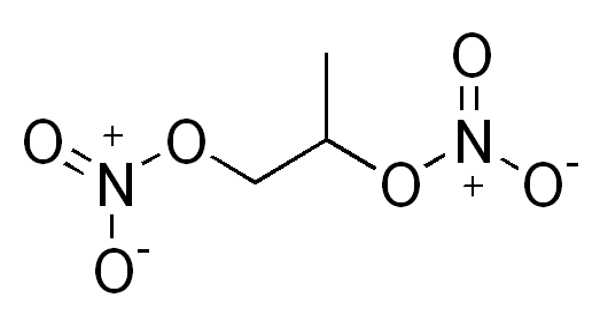 Ethylene glycol dinitrate, also known as nitroglycol, is a chemical compound that is a colorless, oily explosive liquid obtained by nitrating ethylene glycol. It is a colorless to yellow liquid with an oily, odorless taste. In both manufacture and properties, it is similar to nitroglycerin, though it is more volatile and less viscous.

Unlike nitroglycerine, the chemical has a perfect (O) oxygen balance, which means that an ideal exothermic decomposition would completely convert it to low energy CO2, H2O, and N2, with no excess unreacted O2, H2, C, or other high-energy substances, without the need for any other reactions.

In 1870, the Belgian chemist Louis Henry (1834–1913) created pure EGDN by dropping a small amount of ethylene glycol into a cooled mixture of nitric and sulfuric acids. August Kekulé had produced EGDN by nitration of ethylene the previous year, but this had been contaminated with beta-nitroethyl nitrate.

William Henry Rinkenbach (1894–1965), an American chemist, created EGDN by nitrating purified glycol obtained by fractioning the commercial product at a pressure of 40mm Hg and a temperature of 120°. For this, 20g of purified glycol middle fraction was gradually added to a mixture of 70g nitric acid and 130g sulfuric acid while maintaining the temperature at 23°. After washing with 300ml of water, the resulting 49g of crude product yielded 39.6g of purified product. The low yield could be improved by keeping the temperature low and using a different nitrating acid mixture.

When pure, ethylene glycol dinitrate is a colorless volatile liquid; when impure, it is yellowish.

Brisance by lead block compression (Hess crusher test) is 30.0 mm, compared to 18.5 mm for NG and 16 mm for TNT (misleading; exact density and mass of explosive required) (25 or 50 g). Brisance by sand test, determined in mixtures containing 40% kieselguhr, yielded slightly higher results for NGc mixtures than for those containing NG.

When ethylene glycol dinitrate is rapidly heated to 215 °C, it explodes, followed by partial decomposition similar to nitroglycerin. Nitroglycerin has a slightly higher brisance than EGDN.

Along with nitroglycerine, it is used as an explosive ingredient in dynamite. Toxic; capable of penetrating the skin.

It is used in smoke-free explosives and was used in the production of gunpowder during WWII along with cellulose nitrate, centralite, and potassium sulfate.