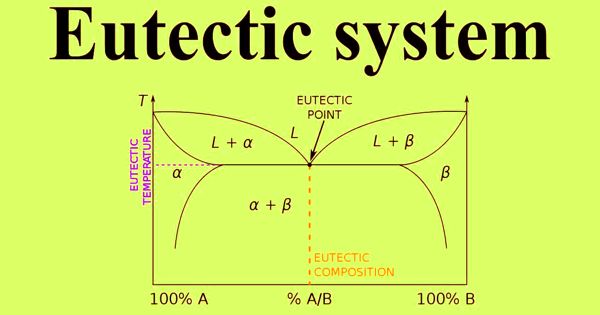 The phrase most commonly refers to a mixture of alloys. Upon heating any other mixture ratio and reaching the eutectic temperature, one component’s lattice will melt first, while the temperature of the mixture has to further increase for (all) the other component lattice(s) to melt. A eutectic alloy is an alloy formed from two or more components that exhibits eutectic behavior. A eutectic alloy melts at a distinct temperature.

Several examples of eutectic systems or eutectoids exist, in metallurgy and in various other fields. These mixtures typically have useful properties that are not possessed by any single constituent substance:

Eutectics are a minimum-melting composition of two or more components, each of which melts and freeze congruently forming a mixture of the component crystals during crystallization. Conversely, as a non-eutectic mixture cools down, each mixture’s component will solidify (form its lattice) at a distinct temperature, until all material is solid. Not all binary alloys have a eutectic point; for example, in the silver-gold system, the melt temperature and freeze temperature both increase monotonically as the mix changes from pure silver to pure gold.