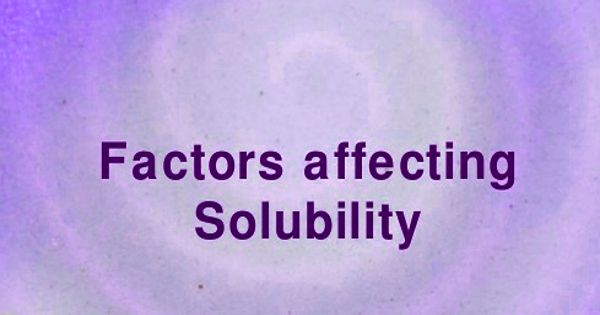 Like dissolves in like. The type of intermolecular forces and bonds vary among each molecule. If we were to increase the surface area of a solid, then it would have been broken into smaller pieces. We would do this to increase how quickly the solute would dissolve in solution. The chances of solubility between two unlike substances are more challengeable than the like substances. If you were to dissolve sugar in water, a sugar cube will dissolve slower than an equal amount of tiny pieces of sugar crystals. For example, water is a polar solvent where a polar solute like ethanol is easily soluble.

Pressure, affects the solubility of a gas in a liquid but never of a solid dissolving in a liquid. Gaseous substances are much influenced than solids and liquids by pressure. When pressure is applied to a gas that is above the surface of a solvent, the gas will move into the solvent and occupy some of the spaces between the particles of the solvent. When the partial pressure of gas increases, the chance of its solubility is also increased. When the gas pressure is decreased, the solubility of that gas is also decreased. A soda bottle is an example of where CO2 is bottled under high pressure. When you open a can of carbonated beverage, the pressure in the soda is lowered, so the gas immediately starts leaving the solution.