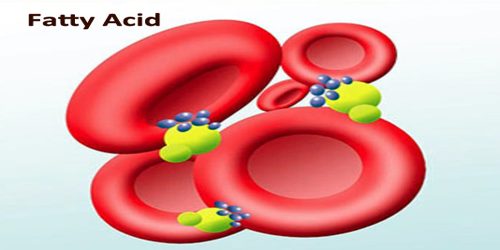 Fatty acids are any of a large group of organic acids, especially those found in animal and vegetable fats and oils. Fatty acids are mainly composed of long chains of hydrocarbons ending in a carboxyl group. A fatty acid is saturated when the bonds between carbon atoms are all single bonds. It is unsaturated when any of these bonds is a double bond. Fatty acids are usually derived from triglycerides or phospholipids. Fatty acids are usually produced industrially by the hydrolysis of triglycerides, with the removal of glycerol. Phospholipids represent another source. Some fatty acids are produced synthetically by hydrocarboxylation of alkenes.

Fatty acids rarely occur as free molecules in nature but are usually found as components of many complex lipid molecules such as fats (energy-storage compounds) and phospholipids (the primary lipid components of cellular membranes). This section describes the structure and physical and chemical properties of fatty acids.

The simplest fatty acids are unbranched, linear chains of CH2 groups linked by carbon-carbon single bonds with one terminal carboxylic acid group. The term saturated indicates that the maximum possible number of hydrogen atoms is bonded to each carbon in the molecule. Saturated fatty acids have no double bonds.

Many saturated fatty acids have a trivial or common name as well as a chemically descriptive systematic name. The systematic names are based on numbering the carbon atoms, beginning with the acidic carbon. Fatty acids are composed largely of a chain of carbon atoms bonded with hydrogen atoms. At one of the terminal ends of a fatty acid is a carboxyl group (-COOH), which is the reactive portion of the molecule and will participate in chemical reactions to make lipids and to store energy. Specifically, this carboxyl group will typically bond with one of the hydroxyl groups (-OH) on a glycerol molecule in a process known as dehydration synthesis. As this bond forms, energy is stored and water is released as a product of the reaction.

Fatty acids are distributed to cells to serve as a fuel for muscular contraction and general metabolism. They are broken down to CO2 and water by the intra-cellular mitochondria, releasing large amounts of energy, captured in the form of ATP through beta oxidation and the citric acid cycle.