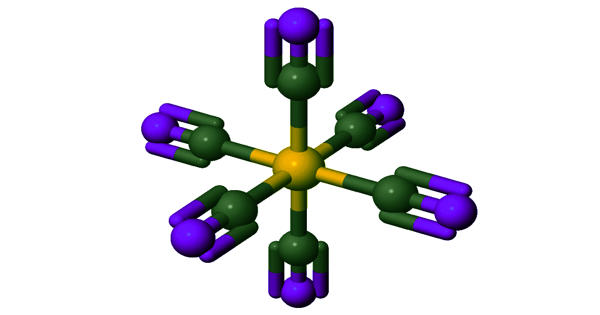 Ferrocyanide is an iron coordination entity. It is the name of the anion [Fe(CN)6]4-. Salts of this coordination complex give yellow solutions. It is usually available as the salt potassium ferrocyanide, which has the formula K4Fe(CN)6. [Fe(CN)6]4- is a diamagnetic species, featuring low-spin iron(II) center in an octahedral ligand environment. Polypyrrole containing ferrocyanide ions as doping anions has been prepared by anodic electropolymerization and has been evaluated for the electroanalytical determination of ascorbic acid.

Although many salts of cyanide are highly toxic, ferro- and ferricyanides are less toxic because they tend not to release free cyanide. It is generally agreed that the ferrocyanide ion is of a low order of oral toxicity, even in relatively large dosage. It is of commercial interest as a precursor to the pigment Prussian blue and, as its potassium salt, an anticaking agent.

The mixing of ferrocyanides with hot concentrated acids liberates dangerous concentrations of hydrogen cyanide and carbon monoxide. Therefore, when admixture with acids is desired, adequate ventilation should be provided and the ferrocyanide salts should be added to the previously diluted acids. Treatment of ferrocyanide with ferric-containing salts gives the intensely coloured pigment Prussian blue (sometimes called ferric ferrocyanide and ferrous ferricyanide).

Tests have shown, however, that the addition of solid sodium ferrocyanide to hot, agitated pickling baths to form concentrations of about 0.15 percent results in the presence of less than 5 p.p.m. of hydrogen cyanide at a point 18 inches above the bath surface. This conversion can be followed spectroscopically at 420 nm, since ferrocyanide has negligible absorption at this wavelength while ferricyanide has an extinction coefficient of 1040 M-1 cm-1. The possibility exists, however, that the level of 20 p.p.m., generally considered dangerous to humans, might be reached if substantially higher concentrations of sodium ferrocyanide were used.

The dominant use of ferrocyanides is as precursors to the Prussian blue pigments. Sodium ferrocyanide is a common anti-caking agent. Specialized applications involves their use as precipitating agents for production of citric acid and wine.

Although ferrocyanides appear to have a low order of toxicity, highly toxic decomposition products can form under certain conditions. For example, acid, neutral, or basic solutions of ferrocyanides or ferricyanides liberate hydrogen cyanide upon strong or prolonged irradiation.