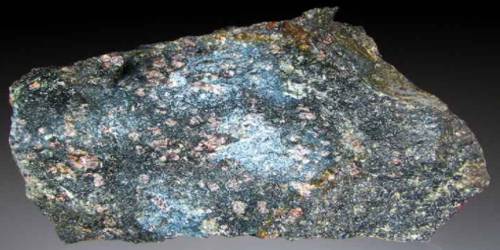 Ferrogedrite is an amphibole mineral with the complex chemical formula of Fe22+(Fe32+Al2) (Si6 Al2)O22(OH)2. It is sodium and calcium poor, making it part of the magnesium-iron-manganese-lithium amphibole subgroup. Defined as less than 1.00 apfu (atoms per formula unit) of Na + Ca and consisting of greater than 1.00 apfu of (Mg, Fe2+, Mn2+, Li) separating it from the calcic-sodic amphiboles. It is related to anthophyllite amphibole and gedrite through coupled substitution of (Al, Fe3+) for (Mg, Fe2+, Mn) and Al for Si, and determined by the content of silicon in the standard cell. Ferrogedrite is identified optically by its distinct cleavage and twinning with angles wider (650 and 1330) than its counterparts, its dark-green to brown rims. and minor matrix. The hardness of ferrogedrite registers between 5.5-5.6 on the Mohs hardness scale and will scratch a knife blade and leaves a gray-white streak on a ceramic plate.

Specimens of ferrogedrite have been collected in the greenstone belt of Africa, in the mountains of Norway, Greenland, Japan and in amphibole specimens from northwest America as well as the southern coast of California. Ferrogedrite exists in low temperature, high-pressure contact metamorphic geologic settings and remain stable up to 600 °C-800 °C due to its iron content.

Ferrogedrite in its fibrous state, along with other amphiboles is considered due to medium-grade conditions. Found initially by Seki and Yamasaki in 1957 in Japan and approved by the IMA in 1978. It is often found as an inclusion in garnet crystals.