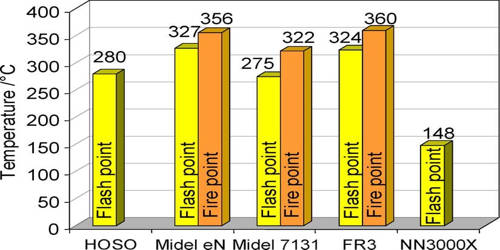 The flash point is a descriptive characteristic that is used to distinguish between flammable fuels, such as petrol (gasoline in the US), and combustible fuels, such as diesel. It is the point of sparking due to the formation of vapor air mix.

The flash point is the lowest temperature at which a volatile substance evaporates to form an ignitable mixture with air in the presence of an igneous source and continues burning after the trigger source is removed. It is also used to characterize the fire hazards of fuels. Fuels that have a flashpoint less than 37.8 °C (100.0 °F) are called flammable, whereas fuels having a flashpoint above that temperature are called combustible.

Gasoline (petrol) is a fuel used in a spark-ignition engine. The fuel is mixed with air within its flammable limits and heated by compression and subject to Boyle’s Law above its flash point, then ignited by the spark plug. To ignite, the fuel must have a low flash point, but in order to avoid preignition caused by residual heat in a hot combustion chamber, the fuel must have a high autoignition temperature.

Diesel fuel flash points vary between 52 and 96 °C (126 and 205 °F). Diesel is suitable for use in a compression-ignition engine. Air is compressed until it heats above the autoignition temperature of the fuel, which is then injected as a high-pressure spray, keeping the fuel-air mix within flammable limits. This testing is a measurement that can be taken very accurately and there are several parameters that can influence its outcome. A diesel-fueled engine has no ignition source (such as the spark plugs in a gasoline engine), so diesel fuel must have a high flash point and low autoignition temperature.