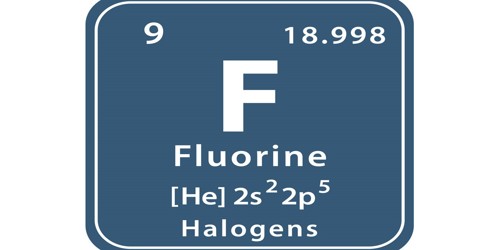 Fluorine (symbol F) is a chemical element that is very poisonous. It is the most reactive element on the Periodic Table. Its atomic number (which is the number of protons in it) is 9, and its atomic mass is 19. It is part of the Group 7 (halogens) on the periodic table of elements. It is a very pale yellow-green, dangerously reactive gas.

Fluorine is a light yellow diatomic gas. It is the most reactive of all the elements and quickly attacks all metals. It is a very reactive gas, which exists as diatomic molecules. It is actually the most reactive element. Fluorine has a very high attraction for electrons because it is missing one. This makes it the most powerful oxidizing agent. It can rip electrons from water (making oxygen) and ignite propane on contact. It does not need a spark. Metals can catch on fire when placed in a stream of fluorine. After it is reduced by reacting with other things, it forms the stable fluoride ion. Fluorine is very poisonous. Fluorine bonds very strongly with carbon. It can react with the unreactive noble gases. It explodes when mixed with hydrogen. The melting point of fluorine is -363.33°F (-219.62°C), the boiling point is -306.62°F (-188.12°C).

Fluorine is not found as an element on the earth; it is much too reactive. Several fluorides are found in the earth, though. When calcium phosphate is reacted with sulfuric acid to make phosphoric acid, some hydrofluoric acid is produced. Fluorite naturally occurs on the earth’s crust in rocks, coal, and clay. It is an essential ion for animals, strengthening teeth and bones.

The most common fluorine minerals are fluorite, fluorspar, and cryolite, but it is also rather widely distributed in other minerals. Fluorine is normally made by electrolysis. Hydrogen fluoride is dissolved in potassium fluoride. Fluorine readily forms compounds with most other elements, even with the noble gases krypton, xenon, and radon. This mixture is melted and an electric current is passed through it. This is electrolysis. Hydrogen is produced at one side and fluorine at the other side. If the sides are not separated, the cell may explode.

Fluorine is used to enrich uranium for nuclear weapons. It is a vital element in the nuclear energy industry. It is also used to make sulfur hexafluoride. Sulfur hexafluoride is used to propel stuff out of an aerosol can. It is also used to make integrated circuits. Fluorine compounds have many uses. Fluoride ions are in fluorine compounds. Fluoride ions can be in toothpaste. Some are used in nonstick coatings. Freons contain fluorine.

Fluorine as an element is extremely reactive and toxic. In its gaseous form, fluorine is incredibly dangerous. It can react with almost everything, even glass. Fluorine is also poisonous.

Fluoride ions are somewhat toxic. If too much toothpaste containing fluoride is eaten then fluoride poisoning may occur. Fluoride is not reactive, though. This gas is very dangerous, as it can cause death at very high concentrations.