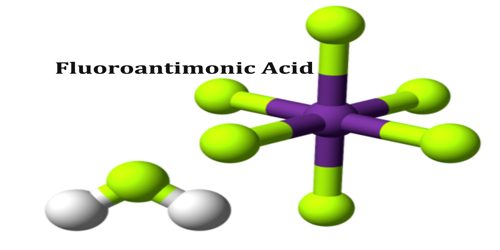 Fluoroantimonic acid is considered the strongest liquid superacid, and depending on who we talk to, may be considered the strongest superacid. It is an inorganic compound with the chemical formula H2FSbF6 (also written H2F[SbF6], 2HF·SbF5, or simply HF-SbF5). It is 2×1019 (20 quintillion) times stronger than 100% sulfuric acid. Fluoroantimonic acid has a H0 (Hammett acidity function) value of -31.3. The reaction to produce fluoroantimonic acid is:

The acid is often said to contain “naked protons”, but the “free” protons are, in fact, always bonded to hydrogen fluoride molecules to make the fluoronium cations similar to the hydronium cation in aqueous solution. It is the fluoronium ion that accounts for fluoroantimonic acid’s extreme acidity. Fluoroantimonic acid is 10 (10 quadrillion) times stronger than 100% sulfuric acid.

Structure and Properties of Fluoroantimonic Acid

Fluoroantimonic acid is a mixture of hydrogen fluoride and antimony pentafluoride in various ratios. The 1:1 combination forms the strongest known superacid, which has been demonstrated to protonate even hydrocarbons to afford carbocations and H2. Two related products have been crystallised from HF-SbF mixtures, and both have been analyzed by single crystal X-ray crystallography. These salts have the formulas (H 2F+)(Sb 2F−11) and (H 3F+2)(Sb 2F−11). In both salts, the anion is Sb 2F−11. As mentioned above, SbF−6 is weakly basic; the larger anion Sb 2F−11 is expected to be still weaker.

HF-SbF5 is extremely corrosive, toxic, and moisture sensitive. Like most strong acids, fluoroantimonic acid can react violently with water, owing to the exothermic hydration. Consequently, it cannot be used in aqueous solution, only in hydrofluoric solution. Materials compatible with fluoroantimonic acid as a solvent include SO2ClF, and sulfur dioxide; some chlorofluorocarbons have also been used. Containers for HF-SbF5 are made of PTFE. This extraordinarily strong acid protonates nearly all organic compounds. In 1967, Bickel and Hogeveen showed that 2HF·SbF5 will remove H2 from isobutane and methane from neopentane to form carbenium ions: