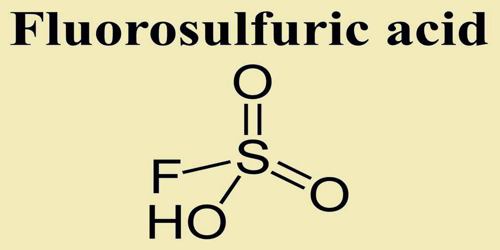 Fluorosulfuric acid is one of the strongest single-molecule acids, and is formed by the combination of HF and SO3 (Chemical Formula: HSO3F). It is commercially available and distillable. It is a fuming liquid. Boiling point 163°C. Density 1.73 g / cm3. Corrosive to metals and to tissue. Both very short contact and the fumes can cause severe painful burns. The formula HSO3F emphasizes its relationship to sulfuric acid, H2SO4; HSO3F is a tetrahedral molecule. It is a colourless liquid, although commercial samples are often yellow.

Fluorosulfuric acid is highly toxic and corrosive and should always be handled in a fume hood with proper protection. It can be purified by distillation under anhydrous conditions using common glassware. When water is excluded, it may be handled and stored in glass containers, but containers should always be cooled before opening because HF gas pressure may have developed due to hydrolysis.

Production and Properties of Fluorosulfuric Acid

Fluorosulfuric acid (HSO3F) is an extremely strong Brønsted acid that has been known since the late 19th century. It is ≈1000 times stronger than pure sulfuric acid, which puts it in the class of superacids. Production process of a fluorosulfuric acid aromatic-ring ester according to the present invention includes reaction of an aromatic-ring hydroxyl compound with sulfuryl fluoride (SO2F2) in the presence of a tertiary amine except pyridine and methylpyridine. It dissolves almost all organic compounds that are even weak proton acceptors. HSO3F hydrolyzes slowly to HF and sulfuric acid. The related triflic acid (CF3SO3H) retains the high acidity of HSO3F but is more hydrolytically stable. The self-ionization of fluorosulfonic acid also occurs: Fluorosulfuric acid esters are important as an intermediate for medicines and agrichemicals. It is used as a catalyst in organic synthesis, in electroplating and as a fluorinating agent. It can also be used as a laboratory fluorinating agent. It is considered to be highly toxic and corrosive. Addition of water to HSO3F can be violent, similar to the addition of water to sulfuric acid but much more violent.