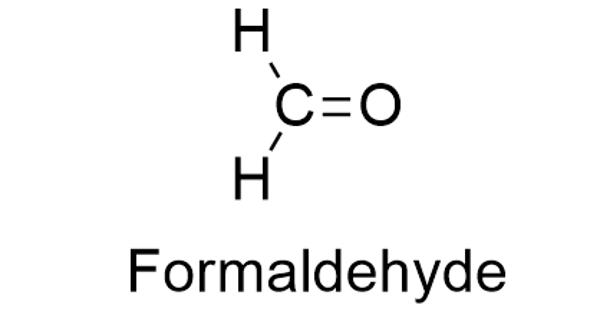 Formaldehyde is a naturally occurring organic compound with the formula CH2O (H−CHO). It is a colorless, strong-smelling gas used in making building materials and many household products. The pure compound is a pungent-smelling colorless gas that polymerizes spontaneously into paraformaldehyde, hence it is stored as an aqueous solution (formalin). It is used in pressed-wood products, such as particleboard, plywood, and fiberboard; glues and adhesives; permanent-press fabrics; paper product coatings; and certain insulation materials. It is also used to make other chemicals. It is the simplest of the aldehydes (R−CHO). The common name of this substance comes from its similarity and relation to formic acid.

Formaldehyde is a colorless poisonous gas synthesized by the oxidation of methanol and used as an antiseptic, disinfectant, histologic fixative, and general-purpose chemical reagent for laboratory applications.

Formaldehyde is quickly broken down in the air – generally within hours. It is an important precursor to many other materials and chemical compounds. It dissolves easily in water, but does not last long there, either. In 1996, the installed capacity for the production of formaldehyde was estimated at 8.7 million tons per year. When dissolved in water it is called formalin, which is commonly used as an industrial disinfectant, and as a preservative in funeral homes and medical labs. It is mainly used in the production of industrial resins, e.g., for particle board and coatings. It can also be used as a preservative in some foods and in products, such as antiseptics, medicines, and cosmetics.

In view of its widespread use, toxicity, and volatility, formaldehyde poses a significant danger to human health. In 2011, the US National Toxicology Program described formaldehyde as “known to be a human carcinogen”.

Processes in the upper atmosphere contribute up to 90% of the total formaldehyde in the environment. It also occurs naturally in the environment. It is produced in small amounts by most living organisms as part of normal metabolic processes. Formaldehyde is an intermediate in the oxidation (or combustion) of methane, as well as of other carbon compounds, e.g. in forest fires, automobile exhaust, and tobacco smoke.

Formaldehyde and its adducts are ubiquitous in living organisms. It also occurs naturally in the environment. Humans and most other living organisms make small amounts as part of normal metabolic processes. It is formed in the metabolism of amino acids and is found in the bloodstream of humans and other primates at concentrations of approximately 0.1 millimolar.

Formaldehyde is an essential building block chemical in the production of hundreds of items that improve everyday life. Little, if any, formaldehyde remains in the final products that consumers use.