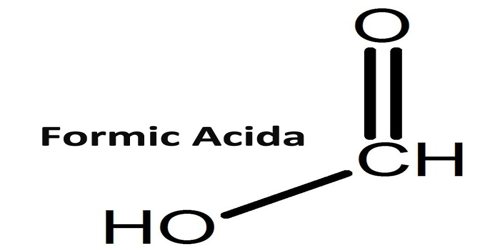 Formic acid is a colorless, caustic, fuming liquid that occurs naturally as the poison of ants and stinging nettles. Its Chemical formula: CH2O2. It is used in making textiles and paper and in insecticides. Formic acid is the simplest organic acid, containing a carboxyl (COOH) group attached to hydrogen. The word “formic” comes from the Latin word for ant, Formica, referring to its early isolation by the distillation of ant bodies, and the trivial name in some languages means “ant-acid”, such as Dutch mierenzuur, Danish myresyre, Faroese meyrusýra and German Ameisensäure. Esters, salts, and the anions derived from formic acid are called formates. Formic acid is not a typical carboxylic acid; it is distinguished by its acid strength, its failure to form an anhydride, and its reactivity as a reducing agent a property due to the CHO group, which imparts some of the character of an aldehyde. The methyl and ethyl esters of formic acid are commercially produced. Concentrated sulfuric acid dehydrates formic acid to carbon monoxide.

Production and Properties of Formic Acid

In nature, formic acid is found in the stings and bites of many insects of the order Hymenoptera, including bees and ants. The principal use of formic acid is as a preservative and antibacterial agent in livestock feed. When sprayed on fresh hay or other silage, it arrests certain decay processes and causes the feed to retain its nutritive value longer. One of the most common industrial uses of formic acid is in the production of leather. Because it is so acidic, formic acid has proven itself to be perfect for use in this fashion. Although formic acid is most frequently used in leather production, other industries currently use formic acid in the process of dyeing and finishing textiles. It is also commonly used as a coagulant in many rubber manufacturing processes. Formic acid is also used in place of mineral acids for various cleaning products, such as limescale remover and toilet bowl cleaner. Some formate esters are artificial flavorings or perfumes. Beekeepers use formic acid as a miticide against the tracheal mite (Acarapis woodi) and the Varroa mite.