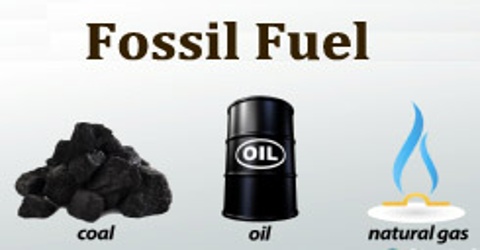 Fossil fuel is a hydrocarbon deposit, such as petroleum, coal, or natural gas, derived from the accumulated remains of ancient plants and animals and used as fuel. The age of the organisms and their resulting fossil fuels is typically millions of years, and sometimes exceeds 650 million years. Fossil fuels contain high percentages of carbon and include petroleum, coal, and natural gas.

All contain carbon and were formed as a result of geologic processes acting on the remains of organic matter produced by photosynthesis, a process that began in the Archean Eon (4.0 billion to 2.5 billion years ago). The burning of fossil fuels by humans is the largest source of emissions of carbon dioxide, which is one of the greenhouse gases that allows radiative forcing and contributes to global warming. A small portion of hydrocarbon-based fuels are biofuels derived from atmospheric carbon dioxide, and thus do not increase the net amount of carbon dioxide in the atmosphere.

Fossil fuels are continually being formed via natural processes, they are generally considered to be non-renewable resources because they take millions of years to form and the known viable reserves are being depleted much faster than new ones are being made. Carbon dioxide and other greenhouse gases generated by burning fossil fuels are considered to be one of the principal causes of global warming.

Fossil fuels are a great source of energy because they originate from living things. The utilization of fossil fuels has enabled large-scale industrial development and largely supplanted water-driven mills, as well as the combustion of wood or peat for heat. Fossil fuels power much of modern civilization; they also see use in fertilizers, plastics and many other chemical compounds. Despite their widely different appearances, coal, natural gas and petroleum oil have several properties in common. Uses and Advantages of Fossil Fuel

One of the main by-products of fossil fuel combustion is carbon dioxide (CO2). The ever-increasing use of fossil fuels in industry, transportation, and construction has added large amounts of CO2 to Earth’s atmosphere. Of the three types of fossil fuels, coal is the only one still in a solid state. It appears as chunks of midnight black rock, which are harvested from the Earth by workers in mining operations. Coal is composed of five different elements: carbon, nitrogen, oxygen, hydrogen, and sulfur. Coal today is used for everything from producing steel and cement to keeping the lights on in homes and businesses.

Natural gas is used primarily to heat homes, power air conditioning systems, and fuel stoves and other cooking appliances. Natural gas is odorless when it is mined from beneath the Earth’s surface, with the smell being added later as a means of alerting people to leaks of the substance.

Oil, also called petroleum, is arguably the most often discussed form of fossil fuel in the world today. A little less than half of the average barrel of oil is refined into gasoline, which is indeed the type of petroleum that we use to fuel our cars. However, other parts of the barrel are refined into oil for asphalt, jet fuel, kerosene, lubricants, and more.

There are many advantages of fossil fuels. Even though they are consumed in mass amounts, they are still abundant and accessible. Fossil fuels provide a large amount of concentrated energy for a relatively low cost. Their abundance allows power plants to be fueled by them, creating a great deal of electricity for the world. Additionally, oil can be transported through the use of pipes, allowing it to be transported relatively easily.