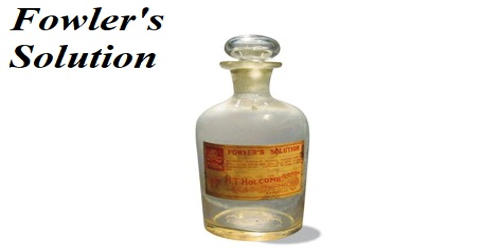 From 1905, inorganic arsenicals like Fowler’s solution saw diminished use as attention turned to organic arsenicals, starting with Atoxyl. From the 19th century onward, an inorganic arsenic compound known as Fowler’s solution has been used for the treatment of leukemia, psoriasis, and chronic bronchial asthma, and organic arsenic compounds have been extensively used in the treatment of spirochetal and protozoal disease. Even so, arsenic trioxide, chemically related to Fowler’s solution, was approved by the US Food and Drug Administration for treating acute promyelocytic leukemia. The tonic action of small doses of arsenious acid, like the action of tonic remedies in general, is scarcely marked by any physiological phenomena and is chiefly shown by its secondary influence in subduing various morbid states of the animal system.

As arsenical compounds are notably toxic and carcinogenic—with side effects such as cirrhosis of the liver, idiopathic portal hypertension, urinary bladder cancer, and skin cancers—Fowler’s solution fell from use. The major current uses of arsenic are in pesticides (e.g., lead arsenate, calcium arsenate, and sodium arsenite), herbicides; cotton desiccants (e.g., arsenic acid); and wood preservatives (e.g., copper chromium arsenate). Arsenious acid is in large doses an irritant and in small doses a tonic; and by virtue of its tonic action, it possesses febrifuge and alternative properties. As an irritant, it is a poison, and a very powerful one, a few grains being adequate to occasion death. The use of Fowler’s solution was first described and published as a treatment for malaria and syphilis in the late 1700s. Many clinical applications for Fowler’s solutions have been studied and utilized over the years, but toxicities have limited its utility.