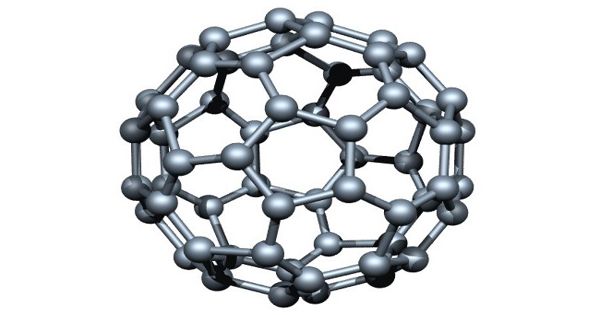 Fullerene – an allotrope of carbon

Fullerenes have attracted considerable attention in different fields of science since their discovery in 1985. It is an allotrope of carbon whose molecule consists of carbon atoms connected by single and double bonds so as to form a closed or partially closed mesh, with fused rings of five to seven atoms. These are probably the most prominent ball-shaped molecules in organic chemistry. The first fullerene was discovered in 1985 by Sir Harold W. Kroto of the United Kingdom and by Richard E. Smalley and Robert F. Curl, Jr., of the United States.

Fullerene is a molecule composed of carbon with the hollow ball of the spherical structure. The molecule has a high degree of symmetry.

Fullerenes are polyhedral carbon cages in which sp2-carbons are directly bonded to three neighbors in an arrangement of five- and six-membered rings. The molecule may be a hollow sphere, ellipsoid, tube, or many other shapes and sizes. Fullerenes consist of 20 hexagonal and 12 pentagonal rings as the basis of an icosahedral symmetry closed cage structure. Each carbon atom is bonded to three others and is sp2 hybridized. Graphene (isolated atomic layers of graphite), which is a flat mesh of regular hexagonal rings, can be seen as an extreme member of the family.

Fullerenes with a closed mesh topology are informally denoted by their empirical formula Cn, often written Cn, where n is the number of carbon atoms. Fullerenes belong to the carbon-only molecules family and are one of the most famous members as it is composed of 60 carbon atoms (C60) made into a ball. However, for some values of ‘n’ there may be more than one isomer.

The family is named after buckminsterfullerene (C60), the most famous member, which in turn is named after Buckminster Fuller. They are clusters of carbon; the surface is made up of 12 pentagonal structures and a number of hexagonal structures. The closed fullerenes, especially C60, are also informally called buckyballs for their resemblance to the standard ball of association football (“soccer”). The wide positive potential range, large surface area, and extraordinary stability have accelerated their application in modified sensors.

The use of fullerene in miniaturized SPE procedures was favored owing to its insolubility in water and organic solvents and its low tendency to form aggregates. Nested closed fullerenes have been named bucky onions. Fullerene is able to fit inside the hydrophobic cavity of HIV proteases, inhibiting the access of substrates to the catalytic site of an enzyme. Cylindrical fullerenes are also called carbon nanotubes or buckytubes. The bulk solid form of pure or mixed fullerenes is called fullerite. Fullerenes have a variety of applications including superconductors, biomedical functions, optics, gas storage, and even cosmetics.