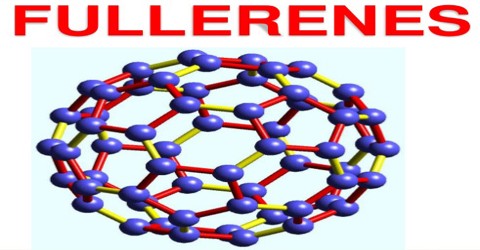 Fullerene, also called buckminsterfullerene, any of a series of hollow carbon molecules that form either a closed cage (“buckyballs”) or a cylinder (carbon “nanotubes”). The first fullerene was discovered in 1985 by Sir Harold W. Kroto of the United Kingdom and by Richard E. Smalley and Robert F. Curl, Jr., of the United States. Fullerenes are similar in structure to graphite, which is composed of stacked graphene sheets of linked hexagonal rings; they may also contain pentagonal (or sometimes heptagonal) rings.

Fullerenes have since been found to occur in nature. More recently, fullerenes have been detected in outer space. According to astronomer Letizia Stanghellini, “It’s possible that buckyballs from outer space provided seeds for life on Earth.” The discovery of fullerenes greatly expanded the number of known carbon allotropes, which until recently were limited to graphite, graphene, diamond, and amorphous carbon such as soot and charcoal. Buckyballs and buckytubes have been the subject of intense research, both for their unique chemistry and for their technological applications, especially in materials science, electronics, and nanotechnology.

An important area of research in modern material nanoscience concerns carbon-based materials, among which fullerenes take one of the first places. Since their first detection and bulk production, they have gained a prime role on scientific scene, reaching the climax when 1996 Nobel Prize for Chemistry was awarded to Kroto, Curl and Smalley for their seminal discovery (Kroto et al 1985). Since the discovery of fullerenes in 1985, structural variations on fullerenes have evolved well beyond the individual clusters themselves. Examples include:

Structures and Physical Properties of Some Higher Fullerenes

Fullerenes consist of 20 hexagonal and 12 pentagonal rings as the basis of an icosohedral symmetry closed cage structure. Each carbon atom is bonded to three others and is sp2 hybridised. The C60 molecule has two bond lengths – the 6:6 ring bonds can be considered “double bonds” and are shorter than the 6:5 bonds.C60 is not “superaromatic” as it tends to avoid double bonds in the pentagonal rings, resulting in poor electron delocalisation. As a result, C60 behaves like an electron deficient alkene, and reacts readily with electron rich species. The geodesic and electronic bonding factors in the structure account for the stability of the molecule. In theory, an infinite number of fullerenes can exist, their structure based on pentagonal and hexagonal rings, constructed according to rules for making icosahedra. The fullerenes are also found to be soluble in common solvents such as benzene, toluene or chloroform. If one shakes up some fullerene soot with toluene and filter the mixture, one obtains a red solution. Many fullerenes have now been discovered in carbon soot, uncovered by electron microscopy, including tubes of carbon many thousands of times long as they are wide, with the same icosahedral structure as the fullerenes. These have diameters as small as 2nm. Carbon “onions” have also been discovered, and consist of carbon cages one inside the other rather like Russian dolls. These carbon particles have millions of atoms, and many have been observed with dozens of concentric shells. Hypothetical structures have been postulated for carbon cages consisting of not pentagonal and hexagonal rings (like C60), but heptagonal (7 membered) rings.

Chemistry of the Fullerenes The reactions and reaction types of the fullerenes described below are merely examples of some recent work, not an exhaustive study.

C60 and C70 have similar properties, with six reversible one electron reductions to C60(6-) and C70(6-) having been observed. Oxidation of C60 and C70 is, however irreversible. The first reduction for both fullerenes is ~1.0V for (Fc/Fc+), indicating they have electron accepting properties. C76 exhibits both electron donor/acceptor properties.

C60 has a tendency of avoiding having double bonds within the pentagonal rings which makes electron delocalisation poor, and results in the fact that C60 is not “superaromatic”. C60 behaves very much like an electron deficient alkene and readily reacts with electron rich species, but can also sometimes behave in a similar way to aromatic rings.