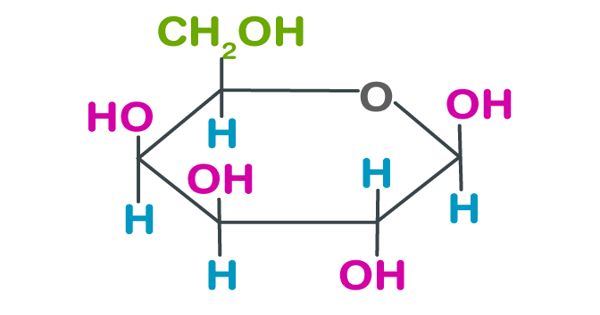 Galactose – a sugar of the hexose class

Galactose is sugar. It is a sugar of the hexose class which is a constituent of lactose and many polysaccharides. It has almost the same chemical structure as glucose. It is metabolized to glucose-1-phosphate through the Leloir pathway for glycolysis, this pathway maintains the pools of UDP-sugars for the biosynthesis of glycoconjugates. It is usually found in nature combined with other sugars, as, for example, in lactose (milk sugar).

Galactose is a monosaccharide and has the same chemical formula as glucose, i.e., C6H12O6. It is found as the monosaccharide in peas. It is similar to glucose in its structure, differing only in the position of one hydroxyl group. This difference, however, gives galactose different chemical and biochemical properties to glucose. Galactose is classified as a monosaccharide, an aldose, a hexose, and is a reducing sugar.

Large amounts of pure galactose do not exist in nature. The major dietary source of galactose is lactose, a disaccharide formed from one molecule of glucose plus one galactose. Instead, galactose is usually found with glucose in lactose, a sugar found in milk and other milk products. Lactose is found only in milk; after weaning, significant quantities of dietary lactose are found only in dairy products. It is a hexose widely used to build up biologically functional glycoconjugates in living organisms.

Galactose is an energy-providing nutrient and also a necessary basic substrate for the biosynthesis of many macromolecules in the body. It is not an essential nutrient, which means you do not need to get it from food to be healthy; galactose can be synthesized in the human body from glucose. Galactose is an important constituent of the complex polysaccharides, which are part of cell glycoconjugates, key elements of immunological determinants, hormones, cell membrane structures, endogenous lectins, and numerous other glycoproteins. In the human body, most of the ingested galactose is converted to glucose, which can provide 4.1 kilocalories per gram of energy, which is about the same as sucrose.

Most of the galactose ingested by humans gets converted to glucose. After lactose is digested and absorbed, galactose arrives in the liver. It is a disaccharide that is made up of two sugars, galactose and glucose, that are bound together. There it is changed into either glucose or glycogen. Foods containing small amounts of free galactose include low-lactose or lactose-free milk, certain yogurts, cheeses, creams, ice creams and other foods artificially sweetened with galactose.