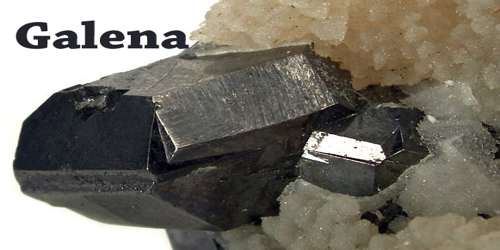 Galena is a gray, metallic mineral occurring in cube-shaped crystals within veins of igneous rock or in sedimentary rocks. It is the main ore of lead. It is also called lead glance, is the natural mineral form of lead (II) sulfide. It is found in igneous and metamorphic rocks in medium- to low-temperature hydrothermal veins. In sedimentary rocks it occurs as veins, breccia cements, isolated grains, and as replacements of limestone and dolostone. Galena is the main ore of lead, used since ancient times. Because of its somewhat low melting point, it was easy to liberate by smelting. In some deposits galena contains about 1–2% silver, a byproduct that far outweighs the main lead ore in revenue.

Galena occurs in a number of environments, such as hydrothermal veins (formed under various temperatures), metamorphic deposits, and in pegmatites. Limestones and dolostones are common in host rocks. The color of galena is lead-grey, but it appears white in polished sections. It is brittle by nature. Its hardness varies from 2.5 to 2.75. It exhibits a metallic lustre. Some of the minerals with which galena is associated are spharelite, marcasite, pyrite, chalcopyrite, siderite, silver minerals, dolomite, quartz, and many other hydrothermal minerals.

Structure and Properties of Galena

Galena tarnishes to a dull gray. Because lead is a primary element in galena, the mineral has a high specific gravity (7.4 to 7.6) that is immediately noticed when picking up even small pieces. Galena is soft with a Mohs hardness of 2.5+ and produces a gray to black streak. Crystals are common and they usually are cubes, octahedrons, or modifications. It has a distinct silver color and a bright metallic luster.

The typical specimen of galena is about 86.6% lead and 13.4% sulfur by weight. However, some specimens of galena contain up to a few percent silver by weight. They are called “argentiferous galena” because of their silver content. In these specimens, silver can substitute for lead in the atomic structure of the galena, or it can occur in tiny grains of silver minerals included in the galena. Galena belongs to the octahedral sulfide group of minerals that have metal ions in octahedral positions, such as the iron sulfide pyrrhotite and the nickel arsenide niccolite. The galena group is named after its most common member, with other isometric members that include manganese bearing alabandite and niningerite.

It’s crystals, which may be cubes, octahedrons, or a combination of the two frequently occurs. Cubes are often partially cleaved. Dodecahedrons are far less common. Also occurs massive, grainy, fibrous, platy, as veins, and as cleavage fragments. Galena is by far the greatest ore of lead. The extraction process to remove the lead from the sulfur is very simple, thus lead has been extracted from Galena since the earliest times.

One of the oldest uses of galena was in the eye cosmetic kohl. In Ancient Egypt, this was applied around the eyes to reduce the glare of the desert sun and to repel flies, which were a potential source of disease.

Galena from certain regions is rich in silver, and some specimens may contain as much as 20 percent silver. Because of this, silver-rich Galena is also an ore of silver. Another use of Galena was its importance in early radio devices.