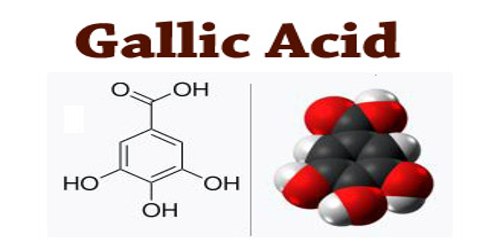 Gallic acid is a colourless crystalline compound obtained from tannin: used as a tanning agent and in making inks, paper, and pyrogallol; 3,4,5-trihydroxybenzoic acid. The chemical formula is C6H2(OH)3CO2H. Gallic acid is found both free and as part of tannins. It is commonly used in the pharmaceutical industry. Gallic acid can also be used to synthesize the hallucinogenic alkaloid mescaline. Salts and esters of gallic acid are termed gallates. The name is derived from oak galls, which were historically used to prepare tannic acid. Despite the name, gallic acid does not contain gallium. Salts and esters of gallic acid are termed “gallates”.

Gallic acid forms intermolecular esters (depsides) such as digallic and trigallic acids, and cyclic ether-esters (depsidones). It is commonly used in the pharmaceutical industry as a standard for determining the phenol content of various analytes by the Folin-Ciocalteau assay; results are reported in gallic acid equivalents. Gallic acid can also be used as a starting material in the synthesis of the psychedelic alkaloid mescaline.

Production and Properties of Gallic Acid

Gallic acid is obtained by the hydrolysis of tannic acid with sulfuric acid. When heated above 220°C, gallic acid loses carbon dioxide to form pyrogallol, or 1,2,3-trihydroxybenzene, C6H3(OH)3, which is used in the production of azo dyes and photographic developers and in laboratories for absorbing oxygen.

Gallic acid is found in a number of land plants, such as the parasitic plant Cynomorium coccineum, the aquatic plant Myriophyllum spicatum, and the blue-green alga Microcystis aeruginosa. Gallic acid is also found in various oak species, Caesalpinia mimosoides, and in the stem bark of Boswellia dalzielii, among others. Many foodstuffs contain various amounts of gallic acid, especially fruits (including strawberries, grapes, bananas), as well as teas, cloves, and vinegars. Gallic acid is present to the extent of 40–60 percent combined as gallotannic acid in Tara (any of various plants of the genus Caesalpinia) and in Aleppo and Chinese galls (swellings of plant tissue), from which it is obtained commercially by the action of acids or alkalies. An Aleppo gall has a spherical shape, is hard and brittle, and is about the size of a hickory nut; it is produced on oak twigs by a gall wasp (Cynips tinctoria). A Chinese gall is produced by insects on Asian sumac (Rhus semialata). Gallic acid is a trihydroxybenzoic acid found in many plants as either the free acid or in the esterified form of gallotannins and ellagitannins. It demonstrates antioxidant activity by scavenging 2,2-diphenyl-1-picrylhydrazyl and hydroxyl free radicals with IC50 values of 9.4 and 191 μM, respectively, and inhibiting microsomal lipid peroxidation with an IC50 value of 1.51 μM. Gallic acid is often used as a standard for determining the phenol content of various analytes by the Folin-Ciocalteau assay where results are reported in gallic acid equivalents.