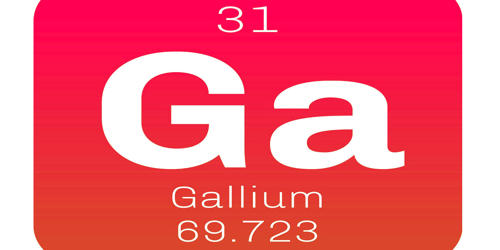 Gallium is a chemical element with the symbol Ga and atomic number 31. It is a blue-gray metal with an orthorhombic crystalline structure; very pure gallium has a stunning silvery color. It is a fairly reactive element. It combines with most non-metals at high temperatures, and it reacts with both acids and alkalis. Elemental gallium is a soft, silvery metal at standard temperature and pressure; however, in its liquid state, it becomes silvery white. If too much force is applied, the gallium may fracture conchoidally. It is stable in air and water, but it reacts with and dissolves in acids and alkalis. The largest producers of gallium are Australia, Russia, France, and Germany.

It is in group 13 of the periodic table and thus has similarities to the other metals of the group, aluminium, indium, and thallium. Gallium does not occur as a free element in nature, but as gallium(III) compounds in trace amounts in zinc ores and in bauxite. Elemental gallium is a liquid at temperatures greater than 29.76 °C (85.57 °F), and will melt in a person’s hands at a normal human body temperature of 37 °C (99 °F). It has the second-largest liquid range of any element and is one of the few metals that is liquid near room temperature (m.pt. 29.76 oC, 85.6 oF ), melting in the hand.

The melting point of gallium is used as a temperature reference point. Gallium alloys are used in thermometers as a non-toxic and environmentally friendly alternative to mercury and can withstand higher temperatures than mercury. In nature, it is never found as a free element and cannot be found in a substantial amount in any minerals. It is a moderately abundant element in the Earth’s crust. Its abundance has been estimated to be about 5 parts per million. It is found primarily in combination with zinc and aluminum ores. It is also found in germanite, an ore of copper sulfide (CuS).

Gallium was discovered (1875) by French chemist Paul-Émile Lecoq de Boisbaudran, who observed its principal spectral lines while examining material separated from zinc blende. Since its discovery in 1875, gallium has been used to make alloys with low melting points. It is also used in semiconductors as a dopant in semiconductor substrates.