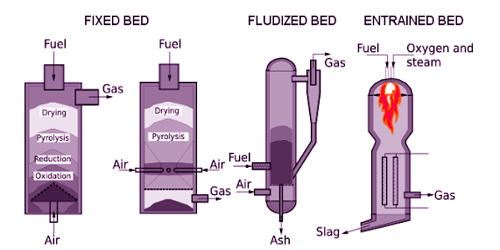 Gasification-based processes for power production characteristically result in much lower emissions of pollutants compared to conventional coal combustion. It is a process that converts biomass- or fossil fuel-based carbonaceous materials into carbon monoxide, hydrogen, and carbon dioxide. It is also a thermochemical process in which the reactions between a fuel and the gasification agent take place and syngas is produced. This is achieved by reacting the material at high temperatures (>700 °C), without combustion, with a controlled amount of oxygen and/or steam. The resulting gas mixture is called syngas (from synthesis gas) or producer gas and is itself a fuel. The power derived from gasification and combustion of the resultant gas is considered to be a source of renewable energy if the gasified compounds were obtained from biomass.

Gasification is a process to convert carbonaceous material into a gas by using a gasifying agent. The advantage of gasification is that using the syngas (synthesis gas H2/CO) is potentially more efficient than direct combustion of the original fuel because it can be combusted at higher temperatures or even in fuel cells so that the thermodynamic upper limit to the efficiency defined by Carnot’s rule is higher (or in case of fuel cells not applicable). The syngas is mainly composed of CO, H2, N2, CO2, and some hydrocarbons (CH4, C2H4, C2H6, etc.). Very small amounts of H2S, NH3, and tars may also be included. Syngas may be burned directly in gas engines, used to produce methanol and hydrogen, or converted via the Fischer–Tropsch process into synthetic fuel. The gasification of refinery residues into clean syngas provides an alternative route for the production of hydrogen and the generation of electricity in a combined turbine and steam cycle. For some materials, gasification can be an alternative to landfilling and incineration. 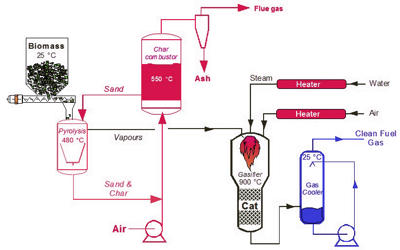 Gasification of fossil fuels is currently widely used on industrial scales to generate electricity. It occurs in a gasifier, generally, a high temperature/pressure vessel where oxygen (or air) and steam are directly contacted with the coal or other feed material causing a series of chemical reactions to occur that convert the feed to syngas and ash/slag (mineral residues). It can generate lower amounts of some pollutants as SOx and NOx than combustion.