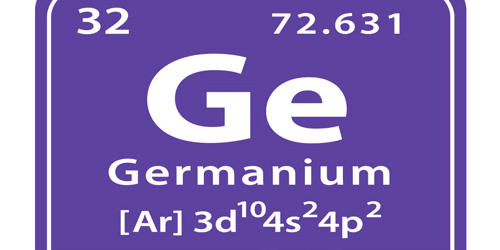 Germanium is a chemical element with the symbol Ge and atomic number 32. It is a chemical element between silicon and tin in Group 14 (IVa) of the periodic table, a silvery-gray metalloid, intermediate in properties between the metals and the nonmetals. It is a lustrous, hard-brittle, grayish-white metalloid in the carbon group, chemically similar to its group neighbors silicon and tin. It is widely distributed in nature but is too reactive to occur free. It has a diamond-like structure and its properties are very similar to the physical and chemical properties of silicon. Primary minerals include argyrodite, germanite, renierite, and canfieldite, all of them rare; only germanite and renierite have been used as commercial sources for the element.

Pure germanium is a semiconductor with an appearance similar to elemental silicon. Like silicon, germanium naturally reacts and forms complexes with oxygen in nature. The name “germanium” comes from the Latin name for Germany, named for Winkler’s home country, according to the Jefferson Lab.

Because it seldom appears in high concentration, germanium was discovered comparatively late in the history of chemistry. Germanium ranks near fiftieth in the relative abundance of the elements in the Earth’s crust. In 1869, Dmitri Mendeleev predicted its existence and some of its properties from its position on his periodic table and called the element ekasilicon. Nearly two decades later, in 1886, Clemens Winkler found the new element along with silver and sulfur, in a rare mineral called argyrodite. Although the new element somewhat resembled arsenic and antimony in appearance, the combining ratios in compounds agreed with Mendeleev’s predictions for a relative of silicon. Winkler named the element after his country, Germany. The element is brittle rather than ductile; the atoms in its crystals are arranged as are the carbon atoms in diamond.