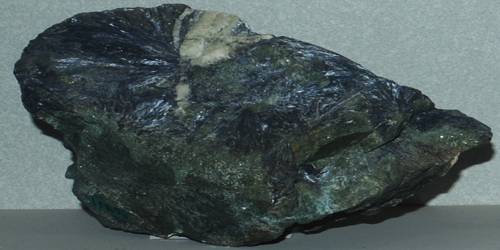 It is named for its typical blue color. In Greek, glaucophane means “blue appearing”. As the major mineral component, it is glaucophane’s color that gives the “blueschist” metamorphic rock type its name. It is formed typically in a highly metamorphic zone known by the geologic term blueschist facies. This facies forms from material caught under subduction zones in mountain belt regions.

This material has undergone intense pressure and moderate heat as it was subducted downward toward the mantle. Glaucophane is also found in eclogites that have undergone retrograde metamorphism.

There is also a rare amphibole called holmquistite, chemical formula Li2Mg3Al2Si8O22(OH)2, which occurs only in lithium-rich continental rocks. For many years, holmquistite was mistaken for glaucophane, as the two look identical in thin section.