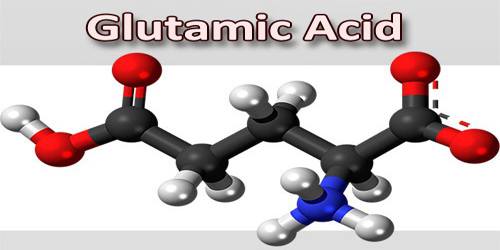 Glutamic acid is a nonessential amino acid (C5H9O4N) occurring widely in plant and animal tissue and having a salt, monosodium glutamate that is used as a flavor-intensifying seasoning. It can be produced in our body from other amino acids, so we do not need to get it from foods in order to be healthy. Glutamates are salts of glutamic acid. Before glutamic acid can act as a neurotransmitter it must be attached to specific receptors located in the central nervous system. One of these receptors is the NMDA (N-methyl-D-aspartate) receptor, and here it regulates the number of calcium, sodium and magnesium ions that can enter and exit the cells.

Its molecular structure could be idealized as HOOC-CH(NH2)-(CH2)2-COOH, with two carboxyl groups -COOH and one amino group -NH2. However, in the solid state and mildly acid water solutions, the molecule assumes an electrically neutral zwitterion structure −OOC-CH(NH+3)-(CH2)2-COOH.

Sources and Functions of Glutamic Acid

Glutamic acid can be sourced from high protein foods such as fish, meat, eggs, poultry, and dairy products. Protein rich vegetables are also a good source of this amino acid. Certain legumes, like lentils and beans, have particularly high concentrations of glutamic acid. In addition to occurring naturally in foods, this amino acid is frequently used as an additive to enhance the flavour of certain products. Often is added in the form or monosodium glutamate (MSG). Glutamate is a key compound in cellular metabolism. In humans Glutamic acid is:

Effects and Benefits of Glutamate Acid

Glutamic acid may, according to certain producer’s information leaflets, cause headache and neurological problems. Individuals with liver or kidney problems should speak with their doctors before using glutamic acid supplements. Glutamic acid is very important in the treatment of conditions such as bipolar, schizophrenia, depression, anxiety and other mood related disorders. Studies have shown that individuals that suffer from these neuropsychological conditions typically have an unbalanced ratio or concentration of neurotransmitters. Low GABA levels are frequently associated with severe depression, neuroticism, anxiety and manic mood states12. There may also be a link between glutamic acid and aggression, with studies showing that mice engaged in aggressive behavior have low levels of GABA and glutamic acid.