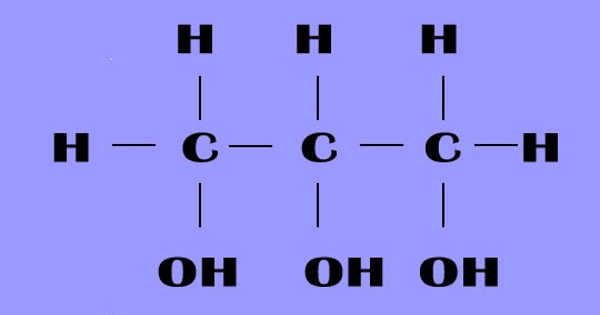 Glycerol (also known as glycerine) is a basic polyol compound. It is a colorless, odorless, viscous, sweet-tasting, and non-toxic liquid. Glycerides are lipids that contain the glycerol backbone. It is widely used in FDA-approved wound and burn treatments due to its antimicrobial and antiviral properties.

It is a chemical that occurs naturally. It is used as a medicine. It can be used to detect the liver disease as an effective marker. It is also widely used in the food industry as a sweetener and as a humectant in pharmaceutical formulations. Glycerol is miscible with water and hygroscopic due to the presence of three hydroxyl groups.

Glycerol is a solvent for flavorings and food coloring. It is also used in low-fat food products such as cookies as a humectant, plasticizer, emollient, sweetener, and filler.

Despite being achiral, glycerol is prochiral in terms of reactions with one of the two primary alcohols. Thus, in substituted derivatives, the molecule is labeled with a “sn-” prefix before the stem name of the molecule.

Glycerol is a triol with a propane structure that is substituted by hydroxy groups at positions 1, 2, and 3. It functions as an osmolyte, solvent, detergent, human metabolite, algal metabolite, Saccharomyces cerevisiae metabolite, Escherichia coli metabolite, and mouse metabolite. It’s a combination of an alditol and a triol.

Glycerol is used as a humectant, solvent, and sweetener in food and beverages, and it may help preserve foods. It is also used as a filler in low-fat commercially prepared foods (such as cookies) and as a thickening agent in liqueurs. Certain types of plant leaves are preserved using glycerol and water. It has approximately 27 kilocalories per teaspoon (compared to 20 for sugar) and is 60% as sweet as sucrose. It does not feed the bacteria that cause dental plaque and cavities. Glycerol is labeled as E422 as a food additive. It is used to keep icing (frosting) from hardening too quickly.

Glycerin is an FDA-approved wound treatment that is mildly antimicrobial and antiviral. According to the Red Cross, an 85 percent glycerin solution has bactericidal and antiviral effects, and wounds treated with glycerin show reduced inflammation after about 2 hours. As a result, it is widely used in wound care products, such as glycerin-based hydrogel sheets for burns and other wound care. It is used to package donor skin used in skin grafts and is approved for all types of wound care except third-degree burns. Because there is no approved topical treatment for third-degree burns, this limitation is not unique to glycerin.

Glycerol is commonly used in medical, pharmaceutical, and personal care preparations to improve smoothness, provide lubrication, and as a humectant.