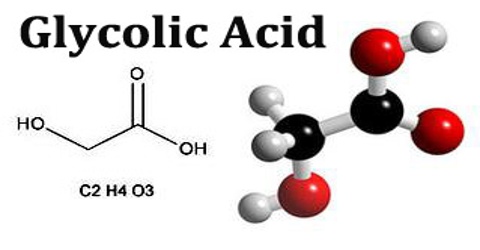 Glycolic acid is a colorless crystalline compound that occurs naturally in sugar beets and sugarcane. It is used in leather dyeing and tanning, and in making pharmaceuticals, pesticides, adhesives, and plasticizers. Its chemical formula is C2H4O3. The name “glycolic acid” was coined in 1848 by French chemist Auguste Laurent (1807–1853). He proposed that the amino acid glycine, which was then called glycocolle might be the amine of a hypothetical acid, which he called “glycolic acid” (acide glycolique).

Glycolic acid, along with lactic acid, belong to a group of chemicals called alpha hydroxy acids (AHAs), which can be found in various fruits and milk.

Glycolic acid is a strong irritant depending on pH. Like ethylene glycol, it is metabolized to oxalic acid, which could make it dangerous if ingested.

Glycolic acid is stable under normal conditions; it can decompose if exposed to temperatures greater than 212 degrees Fahrenheit, according to the Material Safety Data Sheet (MSDS). The decomposition products of glycolic acid can be quite toxic and include carbon monoxide, a potent blood poison. It is also a strong acid and is therefore quite reactive with bases. Glycolic acid is a small organic molecule, consisting of two carbon atoms, four hydrogen atoms and three oxygen atoms. Its molecular weight is 76.05 g/mol and its specific gravity is 1.27, making it approximately 25% denser than water. It is exceedingly water soluble and is even hygroscopic, meaning that it absorbs water out of the air. This interesting property causes crystals of glycolic acid, if left open to the environment, to take up water until they become dissolved, liquefying the sample.

Glycolic Acid can be used in our daily skincare products, without causing any irritation. This is particularly popular across facial washes and cleansers, bringing along rejuvenating benefits from peoples first step of their cleansing routine. It has the smallest molecules in the group so is able to penetrate skin deeply and easily, making it the most effective for treating fine lines, acne, blackheads, dullness, oiliness etc. It is also used in adhesives and plastics. Glycolic acid is often included into emulsion polymers, solvents and additives for ink and paint in order to improve flow properties and impart gloss. It is used in surface treatment products that increase the coefficient of friction on tile flooring.