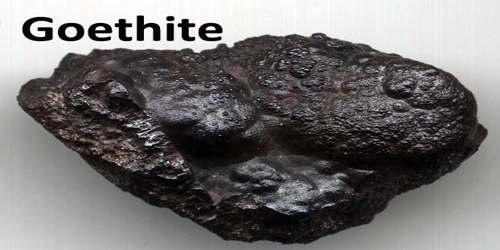 Goethite (FeO(OH)) is a black, brown, or yellow mineral consisting of hydrated iron oxide in the form of orthorhombic crystals or fibrous masses. It is found in soil and other low-temperature environments. Goethite has been well known since ancient times for its use as a pigment (brown ochre). It is usually a dark, uninteresting mineral, though specimens from a handful of locations (especially Colorado) are remarkable for their delicate and beautiful crystal growths and velvety botryoidal growths. Goethite is also frequent as black crystal sprays that form within geodes on drusy Quartz. It commonly forms a pseudomorph after other minerals, especially Marcasite, Pyrite, Siderite, and Gypsum.

It was named in 1806 for J.W. von Goethe, a German poet and philosopher with a keen interest in minerals. The name was originally applied to lepidocrocite [γ-FeO(OH)], a less common mineral with the same chemical composition as goethite but with a different crystal structure. In goethite, oxygen and hydroxyl anions are closely packed in hexagonal arrays, while in lepidocrocite they are arranged in cubic arrays; in both structures, however, iron cations occupy the octahedral interstices.

Structure and Formations of Goethite

Goethite is one of the most common of minerals, and is formed under oxidizing conditions as a weathering product of iron bearing minerals. Goethite forms the gossan capping over the top of many metal bearing vein systems for silver ores and copper. This mineral, though it is occasionally found in blackish brown crystals, usually occurs in radiated globular and botryoidal masses. These massive, reniform, stalactitic forms have a radiating fibrous structure. Rarely in distinct crystals. Goethite is usually associated with limonite and hematite as well as other ores of iron, especially in the upper portion of veins, where it is produced by weathering. Goethite is an iron oxyhydroxide containing ferric iron. It is the main component of rust and bog iron ore. Goethite’s hardness ranges from 5.0 to 5.5 on the Mohs scale, and its specific gravity varies from 3.3 to 4.3. The mineral forms prismatic needle-like crystals (“needle iron ore”), but is more typically massive.

The formation of goethite is marked by the oxidation state change of Fe2+ (ferrous) to Fe3+ (ferric), which allows for goethite to exist at surface conditions. Because of this oxidation state change, goethite is commonly seen as a pseudomorph. As iron-bearing minerals are brought to the zone of oxidation within the soil, the iron turns from iron(II) to iron(III), while the original shape of the parent mineral is retained.

Occurrences, Properties and Uses of Goethite

Goethite is the source for the pigment known as yellow ochre; it is also the primary mineral in some important iron ores, such as those in the Alsace-Lorraine basin in France. Other important goethite deposits are found in the southern Appalachians, U.S.; Brazil; South Africa; Russia; and Australia.

In the United States it occurs in small quantity in connection with the Lake Superior hematite deposits at the Jackson Iron Mountain mine and the Lucie hematite mines in Negaunee, Mich.; at Salisbury, Conn.; at Easton, Penn., and at many other places. Goethite is used as an ore of iron, but in the trade it is classed with limonite as brown hematite. Goethites individual crystals are in small, flattened blades and plates, or finely acicular with a velvety appearance. Most often in botryoidal, reniform, or stalactitic aggregates of radiating crystals or ball-like crystals. Also grainy, in veins, concretionary, oolitic, and in earthy masses. Goethite often assumes the shape of other minerals forming a pseudomorph in place of the original mineral or as a coating above it.

Its main modern use is as an iron ore, being referred to as brown iron ore. It does have some use as a clay earth pigment. Iron-rich lateritic soils that have developed over serpentinite rocks in tropical climates are mined for their iron content, as well as other metals.